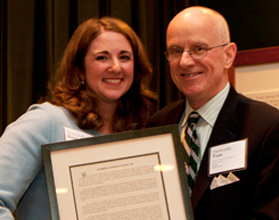 Born and raised an Ohio girl, you looked forward to attending college in an East Coast city, with your sights set on Boston. We owe a debt of gratitude to your mother, who, during a college visit to the region, convinced you to look at a school in rural New Hampshire. You fell in love immediately with Dartmouth's physical beauty and rich sense of community. You were accepted early decision and eagerly embraced what would become your "second family."

Your flourishing undergraduate years revolved around relationships and involvement across campus. You pledged Kappa Kappa Gamma, sailed for the College team as a freshman and sophomore, sang in the Glee Club, hosted a radio show your senior year, and helped found Abaris, a coed senior society based on leadership and service. You thrived academically as well, majoring in government and studying music on a Foreign Study Program in London. You even managed to work for both the admissions office and the Hopkins Center for three years.

After graduation, you earned your J.D. at the University of Michigan Law School. You then began practicing law in Denver and developed a passion for the world of real estate. You turned that avocation into your own vocation with a move back to the Buckeye State, where you started a real estate investment, consulting, and development firm: KK Designs. More proof that Ohio was unmistakably the right move; it was there you met your husband, Brian.

Throughout these milestones you have continued your deep commitment to community. You clocked as many hours for the Junior League of Cleveland as you would for a full-time job, working on community-needs assessments and related projects. We are grateful that you have also been a key volunteer for Dear Old Dartmouth. As president and vice president of the Dartmouth Club of Northeastern Ohio, you were critical to its revival -- and recognition as the 2005 and 2007 Medium Club of the Year. Your efforts for your class, which you have served as president since 2005, earned you Class President of the Year honors in 2006. Additionally, you have been an alumni fund volunteer and are a perpetual enrollment interviewer. You greatly value your involvement with the College, and through it you have created lifelong friends.

Today you can be found in warmer pastures, living in Miami, Florida, where you have lived for the past year and a half with Brian and young sons Thomas and Joseph.

The great actor, humanitarian and fellow Ohioan Paul Newman once said, "In life we need to be a little like the farmer who puts back into the soil what he takes out." Kimberly, for all that you have put back into your alma mater to make it a better place, we are so very pleased to honor you with the Dartmouth Young Alumni Distinguished Service Award.