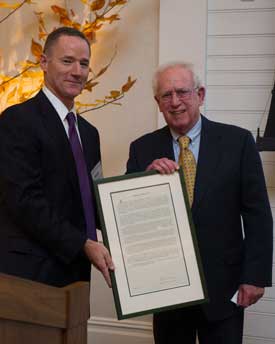 After graduating with a class of 18 students in West Orange, NJ, you traveled north to attend Dartmouth, sight unseen. Although you realized at an early age you wanted to become a lawyer, you were eager to take full advantage of a liberal arts education. One of your most vivid memories is walking home to Streeter Hall one evening while listening to classical music that was playing in all of the dormitories as students prepared for the Music 1 exam. Although you majored in government, you have noted that Dartmouth instilled a love of classical music that has remained throughout your life. In addition to your academics, you enjoyed spending time with your brothers at Gamma Delta Chi fraternity and serving as president of the Dartmouth Young Republicans.

Following commencement, it was off to Cambridge, MA, where you graduated from Harvard Law School in 1957. A loyal and dedicated attorney, you spent the next 38 years specializing in heavy Superior Court litigation, including work with the Karen Quinlan case. This experience led you to serve on the first Medical Ethics Committee in New Jersey and recommend the establishment of ethics committees in all hospitals. Featured on the front page of The New York Times, you graciously responded to an invitation from Dartmouth to provide a campus lecture on this historic case. In 2004, you retired from Addos, Berlin, Kaplan, Dembling, Burke, and Potenza.

In addition to your dedication to your career, you are intensely dedicated to the great Class of 1954, and have consistently held some type of class office throughout the last 30 years. These positions have included president, vice president, head agent, executive committee member, secretary, class agent, participation chair, major gifts committee member, leadership chair, member of the 50th and 55th reunion committees, member of the 50th and 60th reunion giving committees, and co-chair of the 55th reunion giving committee. You also supported the enrollment effort as a district enrollment director for 11 years.

Education and Dartmouth are two of your main passions. You were able to combine these two interests through participation in the Dartmouth Alumni College programs on campus. You and your wife, Barbara, attended 13 of these, although you readily admit that Barbara had a better classroom attendance record, as you often succumbed to temptation and hit the Hanover Country Club to play golf with fellow alumnus and friend Art Frohner '52.

A leader within your community, your civic volunteerism has been extensive and has included serving on the boards of directors of Child and Family Resources, the Morris County Board of Social Services, the New Philharmonic of New Jersey, and the Westfield Symphony Orchestra/New Jersey Festival Orchestra. You have also chaired the council of Morris County YMCAs; co-chaired the Lawyers for Kean Campaign; and served as counsel to the Morris Country Republican Committee, vice president of the New Jersey Jaycees, and member of the Joint Library of the Mendons.

Finally, Dartmouth is very thankful that you have served as such an extraordinary role model for your two sons, Geoff '84 and Eric '89. As Albert Einstein once said, "Setting an example is not the main means of influencing others; it is the only means." As you now lead the Class of 1954 as president, Geoff serves as president of the Class of 1984 and Eric completes the Dartmouth trifecta as vice president of the Class of 1989. We cannot forget Barbara, who has been your partner on this journey for the last 55 years.

With appreciation for your exemplary commitment to your career, community, alma mater, and family, we proudly present you with the Dartmouth Alumni Award.