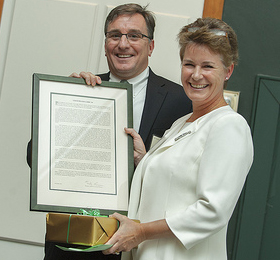 Leigh Miller Garry '84 (right) was presented the
Dartmouth Alumni Award by Marty Lempres '84,
president of the Alumni Council, at the 205th
Alumni Council meeting on November 2, 2012.

Your childhood years brought you to eight different schools, starting in Virginia, then up to Massachusetts, and back down to New York. After falling in love with Dartmouth during a campus visit, it was back up north yet again, this time to the small college in Hanover, New Hampshire.

Armed with a zest for life, a passion to learn, and an abundance of energy, you took full advantage of your undergraduate years at Dartmouth. You excelled in the classroom as a government major, earning a citation for outstanding academic excellence in your "Comparative Government" course. You ventured far beyond the classroom walls in a Foreign Study Program in Toulouse, Spain, and a government off-campus program at the London School of Economics. A member of the cheerleading team, you were co-captain your second year. You cherish your involvement and the lifelong friends you made in Kappa Kappa Gamma, which you served as vice president. The socialite you are, you also helped create a cooking club for females from all corners of the campus. You attended Dartmouth at a very unique time in its history, starting off with a 3-to-1 male-to-female ratio and graduating with the campus reaching parity. In this sea of men, you found the one--a certain lacrosse-playing, second-year senior from the Class of '80 you met during your freshman year--who would continue to matter.

After graduation, you worked for the bank Irving Trust Co., restructuring debt in its public utilities division. It was around this time a whirlwind of life events ensued: You married Bob--that same dreamy lacrosse player from Dartmouth--in 1986, had your first child, started law school at St. John's University, had your second child, received your J.D. in 1994, and had your third child one year later. You put it best when you said, "I have negotiated the sale leaseback of a nuclear power plant, but the best deal I ever made was giving it all up for the birth of my third child." Since then, you certainly didn't sacrifice time or commitment, but rather devoted them to your family and your community--and wouldn't have it any other way. You traded business meetings for PTA meetings, conference calls for lacrosse and hockey games, and business trips for occasional visits to the emergency room for your children's various sports injuries. In 1997, you and Bob proudly founded the Larchmont Mamaroneck Youth Lacrosse League, which grew from 45 kids the first year to more than 500 by the fifth year and is currently one of the country's largest youth lacrosse leagues. In conjunction, you and Bob have been heavily involved with Fields for Kids, an organization that advocates and raises money for adequate playing fields for students participating in sports programs in the area. You have volunteered as president of the Episcopal Church Women for St. John's Church, and have served as vice chair and chair of the board of the Windward School.

Luckily for us, you also value the important role alumni play in Dartmouth's vitality and were raised within a family that instilled in you the virtue of giving back. You have been instrumental to the Great Class of 1984, serving as president and newsletter editor and regularly involved with your reunions; working on every reunion committee, as mini-reunion chair and as reunion co-chair. Leading the charge in fundraising efforts, you have been a leadership agent, class agent, co-chair of your reunion giving committee, and head agent of your 25th reunion--for which you were recognized with the Participation Award for Reunion Giving. Additionally, you have served on the Association of Alumni Executive Committee and conducted more than 300 interviews in your region.

Among the many roles you have played in your life, it is not surprising to hear you say, "I have been called chairman, president, and captain of most organizations I have participated in, but mom suits me best." After all, it is your family that benefits most from your love, humor, and compassion. Tonight, we are thrilled to have your biggest fans in attendance: Your husband, Bob '80, daughter Elizabeth, son J.P. '13 (himself a lacrosse player for the Big Green), and youngest son Tommy.

Abraham Lincoln once said, "Your own resolution to success is more important than any other one thing." Leigh, your personal success is a result of your boundless devotion to the things you care about most. In recognition of your accomplishments and all that you do for your alma mater, it is our great honor to present you with the Dartmouth Alumni Award.