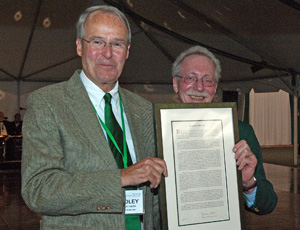 Raised in a family with four brothers, it seemed perfectly natural for you to attend an all-male college like Dartmouth. In fact, you thrived among your fellow classmates instantly bonding with your freshman roommates in a Russell Sage quad; skating with the men's hockey team; serving as secretary in Psi Upsilon fraternity; participating in the Dartmouth Outing Club; and most memorably hiking Mount Washington in a spring blizzard with your fraternity brothers.

Following graduation you served in the U.S. Army before embarking on a thirty-five year career in the fire and liability insurance industry with Chubb & Son, Inc. Your star in this profession rose faster than anybody could catch with postings in New York City, Minneapolis, Philadelphia and New Jersey before retiring as senior vice president. During this period you were also a member of the New York Stock Exchange Arbitration Panel and served as president and trustee of the Chubb Foundation providing scholarships for employee children.

Growing up in a family where the support of education was a family value, Dartmouth has reaped the benefits of your dedication. Your volunteerism on behalf of your alma mater has included serving as an alumni club treasurer, book award chair, vice president and president; participation on the Alumni Council where you chaired the Honorary Degrees Committee; leadership of the Association of Gift Planning Chairs as vice president and president; enrollment interviewer; and assisting multiple Dartmouth campaigns as a leadership fundraiser. In addition, you have supported the great Class of 1960 as a class agent; regional chair; reunion giving committee member and chair; reunion treasurer; matching gift coordinator; newsletter editor; reunion committee member; gift planning chair; and this evening you wrap up your work as a leadership giving agent for the 50th reunion. In recognition of your strong leadership abilities, Dartmouth College has presented you with multiple fundraising awards and in 2001, while you were president of the Dartmouth Club of the Upper Valley, they received the Metro Club of the Year Award and you were honored as Club President of the Year.

Of course, everybody who knows you realizes that there is nobody more organized than you are! Somehow, in addition to your busy career and the extraordinary number of hours you have spent supporting Dartmouth, you have somehow found plenty of time to volunteer for your community. Continuing the male chain of Smiths, you have three sons who you have spent many years coaching in hockey arenas. From the founding of the mite hockey club program in Wayzata, Minnesota to the many years coaching them through the Lawrence Hockey Association in New Jersey, you have enjoyed every minute teaching your children and many others to enjoy this sport. In addition, you have served as chair of the Board of Trustees at the Dunbar Free Library; president of the Canaan Street Lake Association; director of the Newport Tennis Club; a member on capital fundraising campaigns for the local library and forests; chair of the New London Hospital Board; and you served as co-chair of the Amherst College Parents Council with your wife, Julie.

Upon your retirement, you and Julie moved to the Upper Valley that you both love so much. You now enjoy your home in Grantham and your lake house in Canaan where the Smith, Adler and Roesch homesteads form the "Class of 1960 Triangulate". The two of you are happiest when surrounded by your three sons, daughters-in-law, and six grandchildren. We are happy to report that the Smith descendents now finally include one granddaughter!

Abraham Lincoln once said, "Character is like a tree and reputation like its shadow. The shadow is what we think of it; the tree is the real thing." Dudley, you are the real thing and a true man of character. In honor of the outstanding contributions you have made to society, your family, and your alma mater, we are very proud to present you with the Dartmouth Alumni Award.