Featuring four student-councilor discussion groups on campus life and five presentations by students, faculty, and administrators, the 196th session of the Dartmouth Alumni Council, held Thursday-Saturday, May 15-17, had the feel of a high-energy study group--for a course on Dartmouth itself.

Of the two sessions the council holds in Hanover each year, in the fall and spring, the latter logistically presents more opportunity for student-councilor interaction, and this spring, despite the considerable draw of Green Key parties, almost 100 students met with councilors in various forums. In addition, the council met with Tom Crady, the new dean of Dartmouth, and about a dozen other administrators, faculty, and coaches, for discussions about many areas of campus life. The hefty agenda had councilors participating in discussions of admissions; athletics recruiting; the presidential search; liberal arts pedagogy; and student life, particularly the pressing need for more social space on campus. They also enjoyed a dinner with Dartmouth president James Wright, honored James Bildner '75 with a Dartmouth Alumni Award and Julie Cillo '92 with a Dartmouth Young Alumni Distinguished Service Award, and chatted with Big Green Bus students. 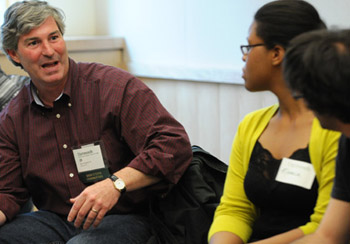 In his remarks at dinner on Friday night, Rick Silverman '81, outgoing council president, said the councilors' job is to "represent views broadly" in reporting back to their alumni constituents. "The power of membership on the Alumni Council," he said, "is the power of the word and of communication."

The search for the 17th president of Dartmouth, to assume the post when President Wright steps down in June 2009, was discussed in a meeting with trustee Al Mulley '70, chair of the board's Presidential Search Committee. Mulley said the trustees were in the process of determining the size and composition of the committee and writing a Statement of Leadership Criteria, drawing on the feedback they've solicited from all parts of the Dartmouth community.
After considering several search consultants, they've retained the services of Isaacson, Miller.
The premier firm, in which John Isaacson '68 is a principal, has conducted recent searches for the University of Pennsylvania, Tufts, Brown, Vanderbilt, and other institutions.

The councilors asked Mulley about many aspects of the search, including the extent of faculty involvement, the ideal length of a college presidency, the background the next president should have, and more. John Daukas '84, incoming council president, asked Mulley how he responds when individuals inevitably express a wish that the next president have a specific background,
that is, should be a woman or a man, should come from academia or from business, should come from inside or outside the alumni community, and so on.

"It needs to be someone who knows Dartmouth well and is the strongest leader for Dartmouth at this time," Mulley said. "Nowhere in the process do we come to a fork in the road." The committee will likely create a list of about a hundred names and winnow it to twenty who "really fit the bill"
and are invited to go further in the dialogue. "We're simply looking for the individual who'll make Dartmouth soar in the years ahead," said Mulley.

The qualities such an individual might possess were explored in "What Makes a Great Dartmouth President?", a student-councilor discussion group facilitated by David Dowd '79,at-large regional representative for alumni clubs. A profile emerged of a visionary leader who understands the mission, academic spirit, and life of Dartmouth as well as its complex constituencies: students, faculty, alumni, and the board of trustees. In addition, the leader needs to be a capable fundraiser and inspirational speaker. Students noted that it's also important to them that the president be visible on campus, citing President Wright's faithful attendance at athletics events.

Seeing the Real World from the Classroom Perspective

Alumni Council members were invited to attend more than fifty classes during their 196th session. Choosing was a challenge, said Tom Daniels '82, at-large representative and consultant at Spencer, Stuart:

I was conflicted on what to take: Something I know, such as Chinese, or something topical, like presidential politics? Maybe something entertaining, such as English literature, or something to better educate me in an area where I sometimes now dabble: economics. I nerded out and took the last option, attending Professor Marjorie Rose's macroeconomics class.

Having done searches for the presidents of two Federal Reserve banks in the past 12 months, in which I had the opportunity to speak with several members of the Federal Open Market Committee, dozen of PhDs and other academics, and a Nobel Prize winner, I found it fun to relearn macroeconomic basics in a classroom setting. Those painful Keynesian IS/LM curves make much more sense now... and I realized that some of the people with whom I'd spoken during the searches were the ones being talked about in the lecture. Still, I'm glad I chose Asian studies as my major!

The Dartmouth classroom teaches so many things. We just don't realize it until years later, when we've had real-world experiences that allow us to fully appreciate those lessons learned.

Crady, who began his tenure as the dean of the College in December, told the councilors that he's met with undergrads in Collis Student Center almost every evening since he arrived and, in every meeting, "students have said they love Dartmouth." He added, "I've been on 50 college campuses in one capacity or another, and you just don't hear that."

That's not to say students don't have concerns, Crady said. Chief among them is the limited campus space available for meetings and social gatherings, in general and at the Greek houses. Crady has formed a committee with students to address the problem. "We need another space similar to Alumni Hall in the Hopkins Center," he said, "where 300 students can have a formal,"
with "lighting and stages they can control."

In addition, he noted that "the sororities want to control more social space, and to do that, they need to own more social space."The membership of the seven sororities at Dartmouth now exceeds that of the thirteen fraternities. Increased house ownership by sororities was also among the topics explored in "Gender Equity: Who Controls Campus Spaces?", the student-councilor discussion group facilitated by Louisa Guthrie '79, Classes of 1979 and 1980 representative.

The 28 Greek letter organizations at Dartmouth--
5 multicultural and 3 coed organizations in addition to the sororities and fraternities--have a total membership of 62 percent of all eligible undergraduates. Apanel that included four students; John Engelman '68, Alpha Delta fraternity advisor and former councilor; and moderator Deb Carney, assistant dean of residential life, gave the council an up-close look at students' experience of Greek membership at Dartmouth today.

Although the students described taking highly individualized paths to their Greek organizations, each expressed the same blazing sense of family. Emily Eberle '09, president of Alpha Theta coed organization, treasurer of the Greek Leadership Council, and member of the Dartmouth chamber orchestra and marching band, said, "During Rush, I was out visiting other organizations, but found myself always coming to Alpha Theta at the end of the day to relax. I realized it was the one."

"It's kind of funny to me that I'm even on this panel," said Anthony Arch '09, member of Theta Delta Chi fraternity and co-captain of the rugby team. "I never thought I'd be in a house, and had
a hard time pledging. Once I pledged, that was it." Arch is now the president of the Interfraternity Council and has worked to improve sustainability in the houses as a "Green Greek" intern.

In addition, the students noted the unusual degree of openness the Greek organizations show one another at Dartmouth. "I can walk into any house and feel welcome," said Michael Simoni '08, president of Alpha Phi Alpha fraternity and member of the Palaeopitus Society, who was named Greek Male President of the Year.

The panel made it clear that alumni can help Greek organizations in myriad ways: by providing financial support to allow need-blind admission to the organizations; by participating in discussions aimed at revising the alcohol policy to enable sororities (and not just fraternities) to host parties in which alcohol is served; and by supporting the sustainability efforts and upkeep of houses. In response to a comment by Jim Taylor '67, Club Officers Association representative, that the frat houses "look like the football team went through them," Engelman pointed out that houses are used "much more extensively for social activity" today than in the past and "there are no off weekends regarding parties now." Custodial services would be a boon to most houses, he said, but "they don't come cheap."

Moving from the prosaic to the pedagogic, the councilors also enjoyed a faculty panel titled, "What's the Purpose of a Liberal Arts Education in the 21st Century?"

Jon Kull '88, associate professor of chemistry and faculty representative to the council, said that as the world becomes smaller and more communicative, opportunities for Dartmouth students to become linguistically and culturally diverse are important, and James Murphy, professor of government, shared his interest in the great books of Western civilization. Moderator Don Pease, professor of English, said the panel was intended to give councilors an "a sense of the debate in the academy around the 'what' and 'how' of knowledge and how to organize a curriculum." All three faculty said students need to have strong communication skills and more systematic academic advising earlier in their careers. A new dean of advising was recently appointed.

What follows for councilors from the weekend's worth of information gathering?

Many of the topics covered, Silverman said, "are being addressed by Tom Crady. Nearly every councilor I spoke with was enthusiastic about Tom's plans and perspective. We'll likely work with him to aid in any way we can."

Tending to their own organizational business, the councilors voted Janine Avner '80, council president-elect. They elected Rick Allen '75, at-large representative, and Tracey Salmon-Smith '87, chair of the Young Alumni Distinguished Service Award Committee, to the Nominating and Alumni Trustee Search Committee and Tom Callahan '84, at-large representative, to the Alumni Liaison Committee. Three council constitutional amendments were passed, removing specification of the number of candidates the Nominating Committee may present for open alumni trustee seats (the committee was previously required to present three candidates), specifying staggered three-year terms for council members and Association of Alumni members elected by the council to the Alumni Liaison Committee, and lengthening the term for the faculty representative to three years.