Norman E. “Sandy” McCulloch Jr. ’50, a lifelong champion for international studies at Dartmouth and a visionary College leader, died on Sunday, July 26, at the age of 94.

Sandy McCulloch served on the Dartmouth Board of Trustees from 1975 to 1988, the final three years as chair. As a volunteer leader in the alumni community, he became a close friend of John Sloan Dickey, who served as president of Dartmouth from 1945 through 1970. To honor the former president, McCulloch spearheaded the effort to establish the John Sloan Dickey Center for International Understanding, which seeks to focus collaborative, multidisciplinary research on complex global challenges.

“John and I loved the outdoors and spent much time at the Second College Grant,” McCulloch recalled in an early 2020 interview. “That’s how our friendship grew. I had great admiration for all that John did for Dartmouth and felt Dartmouth needed to do something to recognize him, to honor his legacy in international studies and global issues, and to increase the scope of Dartmouth’s offerings to students. I met with Dartmouth leadership and we decided a center on international understanding would best capture John’s vision and spirit.”

McCulloch served as the inaugural chair of the Dickey Center Board of Visitors, a post he held for 31 years, and he remained active on the board as chair emeritus. He helped define the center’s programmatic scope, established a fund to support its operations, and endowed the center’s directorship.

McCulloch said his experience as a Dartmouth undergraduate, which included a year in Europe, sparked his lifelong interest in global affairs.

“One of the distinguishing things about Dartmouth is that students from all over campus, including the professional schools, can get involved in global studies,” he said in the 2020 interview. “Dartmouth makes that a priority, which I’ve always loved. I was on one of the early trips to France as an undergraduate, and it taught me the importance of a global outlook, an appreciation of people different from yourself, from different cultures. That was an eye-opener for me and an experience that stayed with me my whole life.”

“Sandy McCulloch was devoted to Dartmouth, understood her distinctions, and persistently, restlessly, devotedly aspired for her betterment,” says President Hanlon. “He championed Dartmouth’s singular educational model as a fusion of a best-in-class undergraduate college and premiere global research university, unwavering in his desire that we have impact on the world, and in turn be recognized the world over.” 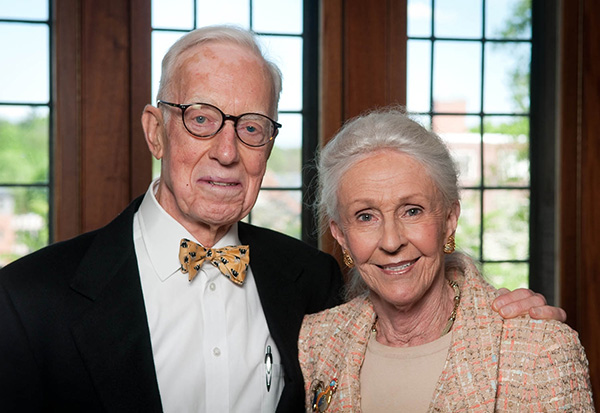 Decades of Service to Dartmouth

McCulloch was a founding member of the President’s Leadership Council, chaired the Campaign for Dartmouth, and served as president of the Alumni Council. In addition to their extensive giving to the Dickey Center, McCulloch and his wife, Dorothy, endowed the James O. Freedman Presidential Professorship and supported the Institute of Arctic Studies, the Class of 1950 Senior Foreign Affairs Fellowship, and Dartmouth’s international programs in Tanzania.

Particularly interested in America’s relationship with Canada, in 2010 he supported a program to bring distinguished visiting faculty from Canada to teach U.S.-Canadian relations classes in the government department. This past spring, the McCullochs made a $2 million gift to establish the  McCulloch Program on Canadian-American Relations at the Dickey Center.

“I have known Sandy for nearly 50 years, dating back to when he was on the Alumni Council,” says James E. Wright, president emeritus of Dartmouth. “As a volunteer, trustee, donor, and as a friend, he has always focused on ways he could contribute to make Dartmouth stronger and better. He was very proud of all that he contributed to the College. And we are incredibly grateful to him for all he has contributed.”

Wendy Becker ’87, a member of the Dickey Center Board of Advisors, first met McCulloch in 1986 when, as president of the Student Assembly, she served on the presidential search committee that selected James Freedman to succeed President David McLaughlin.

“Sandy’s pillars of commitment to service, his family, and his career, combined with his New England disposition, have served as a framework that have shaped my past 30 years,” says Becker. “During the search for David McLaughlin’s successor, he led and prodded us to demand more of what we could be—to lead the world and instigate positive global change.”

Daniel Benjamin, who recently stepped down as the Norman E. McCulloch Jr. Director of the Dickey Center for International Understanding after seven years to become president of the American Academy in Berlin, praised McCulloch’s tireless leadership.

“Sandy McCulloch’s determination to leave the world better than he found it was nothing short of extraordinary,” says Benjamin.

“Well after he’d stepped down from being chair of the Dickey Board of Visitors, he would call regularly to find out what was going on and ask how he could help, which senior official he could buttonhole to advance our cause, where his next gift should be directed, or simply to praise the latest thing he’d heard about Dickey. His generosity came in every form. He was endlessly interested in world events, and like his hero John Sloan Dickey, he believed that a life well-lived required that Dartmouth undergrads be interested—and engaged—as well.”