"It'd be hard to overestimate the impact of such geographic, philosophic, ethnic, gender, vocational, and age diversity focused on a single task," councilor Peter Elias '69 wrote in an email to his alumni constituents after the Dartmouth Alumni Council concluded its spring session on May 16, "contributing what we can to ensuring that Dartmouth remains a place where the brightest, most promising young people can prepare for the known and unknown challenges ahead. The campus, students, and alumni have changed hugely since my experience in the late 60s, and I come away pleased and proud of how Dartmouth continues to grow." 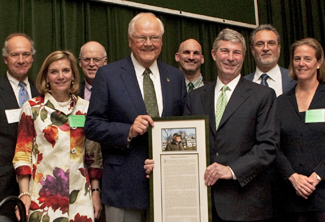 The Alumni Council's 198th session indeed offered an abundance of inspirational moments. In addition to carrying out much committee and other council work, the councilors honored President James Wright, whose 11-year tenure ends on June 30, and Susan DeBevoise Wright; welcomed President-Elect Jim Yong Kim; talked with student veterans of the Iraq War; participated in panels, receptions, and dinners with 50 additional students; and presented 2008-2009 Dartmouth Alumni Awards to Nancy Kepes Jeton '76 and Sam Ostrow '67.

In a dinner address, President Wright acknowledged the hold that memories can have but emphasized the "dream and vision" of Dartmouth. "Dartmouth is a dream as old as [founder Eleazar] Wheelock and as young as a member of the Class of 2013. Dartmouth is not about our memories; it is about their dreams," said the president, who will be remembered for his dedication to creating a diverse community of scholarship and learning, inside and outside the classroom. Six past council presidents joined current president John (JB) Daukas '84 in paying tribute to President Wright, after which the council gave him a standing ovation.

A panel of veteran students--Samuel Crist '10, Greg Agron '11, and Tom Richardson '11--and moderator Ralph Manuel '58, '59Tu met with the councilors for a discussion that proved to be a highlight of the council session. Before coming to Dartmouth, each student had been contacted by President Wright, who served in the Marines, as part of his efforts to visit veterans returning from Iraq and Afghanistan and encourage them to pursue college. 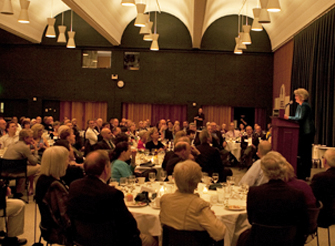 "This is the most special place in the world to get an
undergraduate education," said Dartmouth Alumni Award
recipient Nancy Kepes Jeton '76. photo: Joe Mehling '69

Taking questions, the students discussed their interaction with other students, the support of the Dartmouth Undergraduate Veterans Association student organization, whether they planned to reenlist after graduating, and more topics. Agron, who served three deployments to Iraq and is now a Russian major, said, "It's been an absolute joy to be here. I never really appreciated what a group of people as professors can do for you, but it's pretty awesome here."

Upperlass dean Kent Shoemaker commented on the students' "tremendous attitude and work ethic" and called them "an incredible, incredible addition to Dartmouth."

Exploring other aspects of student life, the councilors heard from the deans of the professional and graduate schools on these schools' accessibility to undergraduates and need to position themselves vis a vis market demands. Brian Pogue, dean of graduate studies, noted that applications to programs with highly marketable skills are increasing and "graduate education today is shifting toward problem-based education."

During an extensive report by the council's Ad Hoc Committee to Support Greek Letter Organizations, committee member Tom Peisch '70, Classes of 1969 and 1970 representative, noted that "the strongest Greek letter organizations are the ones that have mature alumni advising and involvement." He suggested the council "work on putting together a solid alumni backing for each of the Greek letter organizations on campus." 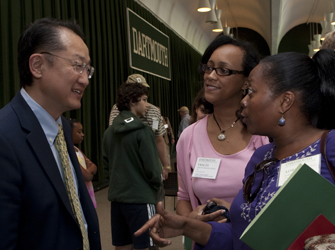 The council also met with students in discussion groups on athletics, the performing and studio arts, diversity, and the Dartmouth Outing Club.

Rick Silverman '81, chair of the Alumni Liaison Committee, gave an update on the committee's work on its 2009-10 annual report on alumni interests and concerns. He asked councilors to continue forwarding to the ALC feedback they receive from their alumni constituents; the committee has received about 500 emails so far.

Ed Haldeman '70, chair of the Dartmouth Board of Trustees, applauded the ALC as "a remarkable step forward in improving communication" among the board, the College, and the alumni body.

In a lunchtime address, Dartmouth president-elect JimYong Kim, MD, PhD, who is the chair of the Department of Global Health and Social Medicine at Harvard Medical School and a former senior official at the World Health Organization, referred humorously to the "classic Korean American Iowan upbringing that I went through" and related how he came to the decision, early in life, to choose to work on things he cared deeply about.

When asked to consider the Dartmouth presidency, President-elect Kim said, "I did what those of us in evidence-based medicine always try to do; I did research." This included talking with many alumni, and he cited the alumni community's intense passion for the College as one of the reasons he accepted the offer to lead Dartmouth. President-elect Kim told the councilors, "You're the reason I'm here."

Deborah Klenotic is the editor of the Alumni Relations Office Web site.