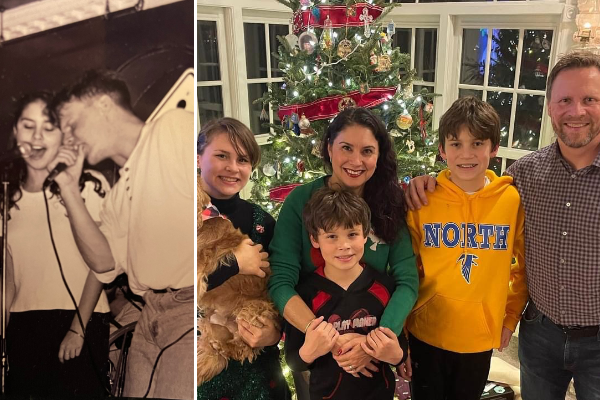 How we met: I was a singer in the Rockapellas and Matt was a football player. We had many mutual friends but didn't cross paths until junior year. After an injury sidelined him, he started a band, Kodiak Jack, our junior spring. He came to many of my shows and one night as we were hanging in the basement of AD, he grabbed a harmonica, sang Piano Man and asked me to sing in his band. I said, “Sure, that sounds fun!” Senior year, that morphed into a relationship and the rest is history!

Favorite Dartmouth memory: The one that stands out was a show at AXA’s beach party. The whole fraternity had tons of sand and we all wore beach garb. So many of our friends went and it was just such a fun night!

Today: We live outside Chicago and have three kids, Siena, 15, Christian, 12, and Kieran, 9. I’m a marketing consultant specializing in B2B and Hispanic marketing, and Matt heads up the Midwest sales operations for G&A Partners, a human resource outsourcing company. 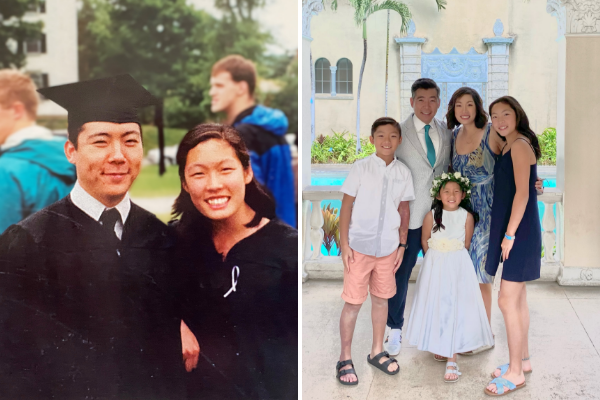 We met: During Freshmen Orientation Week at an ACF (Asian Christian Fellowship) meet-and-greet. At the time, Justin had a bit of a crush on Jeannie, but she had an HTH (hometown honey). Regardless, Jeannie was happy to have made her first friend at the College. They shared a calculus class freshmen fall and spent some time studying together.

Justin was tutoring her in the subject, but Jeannie is the one that ended up getting a top grade in the class. They remained friends throughout their college experience and kept in touch as alumni. Justin was able to break out of the "friend zone" three years later, during a mini-reunion trip to Vegas. They were married in 2005 and now live on Mercer Island, Wash. with their three children (ages 13, 11, and 6).

Today: Jeannie works in compensation and global mobility at Starbucks and serves on the board of a local non-profit organization. Justin is a user experience designer at Microsoft and an Admissions Ambassador for Dartmouth. They both play recreational tennis and make an intimidating mixed doubles pair. 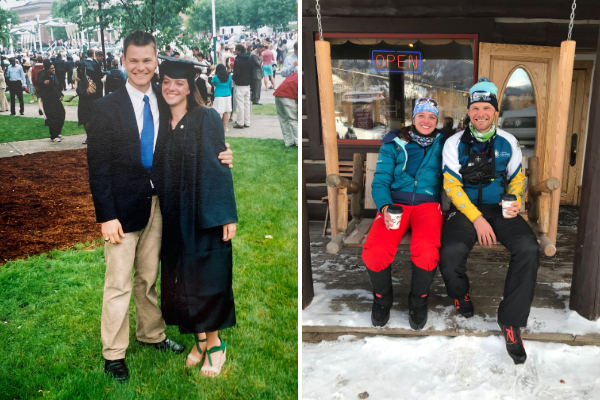 How we met: Zach and I were both on the ski team. We met the first time at the very first practice. It was a LONG run in which the team got a bit lost. I was dragging and apparently had a whole conversation with him that I still don’t remember, but it was our first meeting. We started dating early in winter term after some not-so-subtle pushes from our teammates. 18 years later we’re still going strong!

Today: Sara is now the Director of Operations for U.S. Biathlon, and Zach is the Senior Sport Program Manager and Head Biathlon Coach at Soldier Hollow. We get to work together sometimes on projects and it's fun being able to improve our sport and inspire the next generation of athletes. We have a three-and-a-half-year-old son named August. 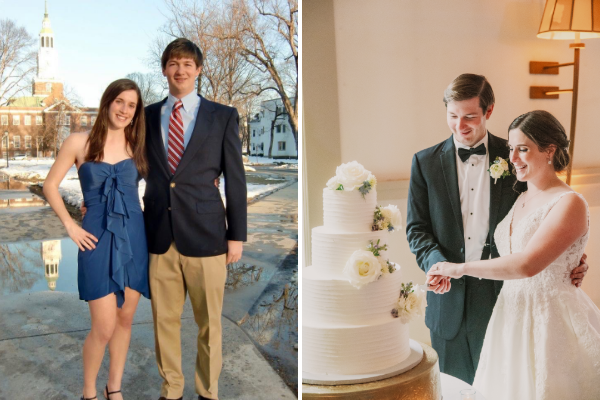 We met: On the first day of orientation as freshman floormates on the first floor of Russel Sage and were quickly smitten with one another.

Favorite Dartmouth memory: Enjoying the outdoors in and around Hanover: sunset hikes up the Gile Fire Tower, lazy afternoon walks through Pine Park, chilly weekends on the slopes of the Skiway, summer dips with friends in Mink Brook, or a cozy night in a cabin at Moosilauke.

Today: We were married this past July after 10 years together and now live in Greenwich, Conn. Andrew works for Boston Consulting Group and Maddie is a 4th grade teacher at Greenwich Country Day School. 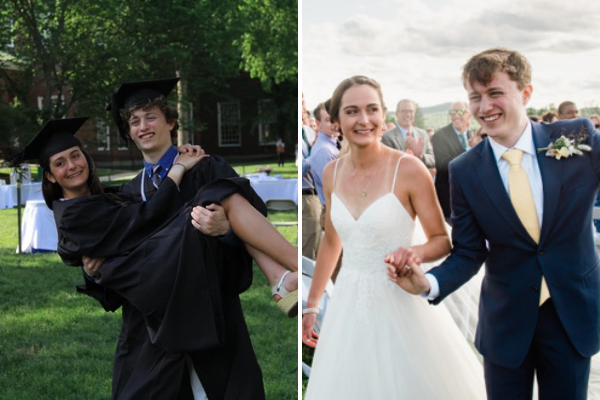 We met: On our freshman trip in 2014 (B66, a Hiking 3 trip in the Northern Presidentials) and started dating in the winter of our freshman year. In 2019, Connor proposed on top of Mt. Jefferson, which was the first mountain we summited during the trip and our favorite in the Whites.

Favorite Dartmouth memory: Hiking the Dartmouth Fifty together during our senior fall. The 54-mile trek was longer than anything either of us had done before but hiking through the night with friends and singing loudly to stay awake, boosting each other’s morale when we needed it, and accomplishing a goal that we never thought we could achieve together was amazing. It was a huge highlight of both of our Dartmouth experiences!

Today: After postponing our wedding for a year due to covid, we got married at Patch Orchards in Lebanon, NH on July 31, 2021. We live in Boston, where Connor is an investment analyst and Katie is in her third year of a PhD program in political science, with the goal of becoming a professor. 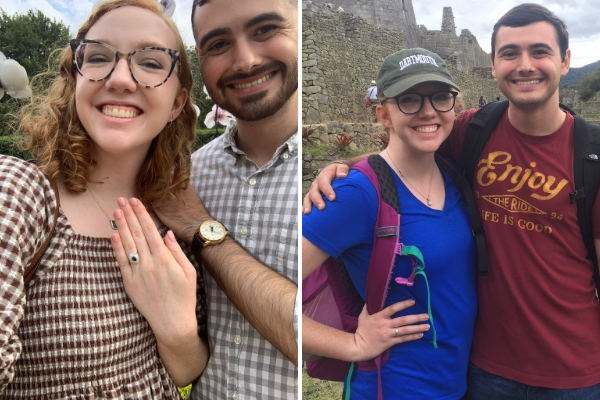 How we met: Henry and I met on an LSA+ to Peru our second year in 2016. We connected immediately and started our relationship, perhaps to the dismay of our cohort. It was apparent very early on that we were meant for each other. We pushed through a crazy and very different D-Plan. We both had off terms, I had fieldwork for my thesis, a graduate degree abroad. Through it all, we were deeply in love and we made the distance work.

Favorite Darmouth memory: So hard to choose! From meeting on the study abroad, or our dates at tuk-tuk, or studying together in Berry, or hiking Moosilauke on the Fourth of July, or making each other valentine gifts in the jewelry studio we have too many to choose from. I'm just glad Dartmouth brought us together!

Today: Henry is in a Ph.D. program at Georgia Tech, and I am a teacher at a school in Augusta, Ga. We will be married in November of this year!