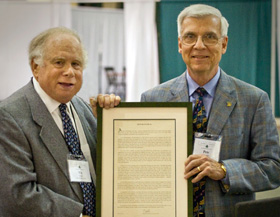 Pete Bleyler '61 (right) was presented the 2010-11 Dartmouth Alumni Award by Vic Rich '61 during their class Reunion in June.

A native of Rochester, New York, you have commented that you fell in love with the Dartmouth campus the first time you saw it. Fifty years later, this still proves true as you have chosen to retire to the Upper Valley to enjoy its multitude of mountains, rivers, hiking trails, and lakes.

As an undergraduate, you participated in a wide variety of activities such as singing in the Glee Club, paddling in the Canoe Club, and joining Zeta Psi fraternity. You have many fond memories of those years, including a presentation by Robert Frost to your class at Dartmouth Hall. At your 35th reunion, the great Class of 1961 donated the Robert Frost statue to honor this famous literary figure. A math major, you remember the many notable faculty in that department who encouraged you to persevere. Recently, you enjoyed re-reading a citation which Professor Slesnick had written in one of your classes noting, "an excellent recovery (after one mediocre hour exam) to a splendid final examination."

As a Navy ROTC student, you had a very busy senior week during which you graduated, were commissioned into the Navy, and married your beautiful wife, Ruth. Then it was off to submarine school and bases in Pearl Harbor and Virginia Beach. Five years later, you accepted a position with Travelers Companies, Inc. as an actuarial consultant. A thirty-four year career in this financial area and human resources followed, resulting in your family crisscrossing the country many times between Hartford, Chicago, St. Louis, Washington, Boston, and New York City. In fact, when you retired from Mercer LLC in 2000 as their chief human resource officer and worldwide partner, you were commuting weekly between New York City and Lyme, New Hampshire.

As busy as you were over those years, you have never forgotten your alma mater. The depth and breadth of your volunteerism on behalf of Dartmouth College and your fellow alumni has been truly astounding. The many roles you have held include president, reunion giving committee chair, co-head agent, matching gifts chair, reunion committee member, leadership agent and class agent of the Class of 1961. In addition, you are coordinator of the class connections program between your class and the Class of 2001, and also work with the class projects. In 2003, you joined the executive committee of the Dartmouth Club of the Upper Valley as their community service chair encouraging them to initiate an Upper Valley Winter Special Olympics. Nine years later, this successful program has expanded to both summer and fall Special Olympics programs -- supported by alumni, students and community volunteers.

You have been no less active in each of the many communities you have lived as a member of the board of directors for the Special Olympics in Virginia, Massachusetts and New Hampshire; a Town of Lyme Selectboard member; president of the Special Needs Support Center of the Upper Valley; Appalachian Trail monitor for the Dartmouth Outing Club; land steward for the Society for the Protection of New Hampshire Forests; and president of the Institute for Lifelong Education at Dartmouth (ILEAD).

As impressive as all of this is, everybody who knows you realizes that your life revolves around your wife, Ruth, and your three daughters. You and Ruth have led a very balanced family life and even shared your alma maters with one daughter, Melanie, attending Cornell, while another, Allison, attended Dartmouth. Your third beautiful daughter, Tracy, has excelled athletically and your family was so very proud to be in attendance at the International Special Olympics in Salt Lake City when she won a gold medal in figure skating. It is not surprising that you and Ruth have decided to celebrate your 50th wedding anniversary this week with your children, their spouses, and your grandchildren with a trip to Disneyworld and a family cruise.

In recognition of your extraordinary contributions to your career, society and your alma mater, it is our great honor to recognize you this evening with the presentation of the Dartmouth Alumni Award.