"The Undoing Project: A Friendship That Changed Our Minds" by Michael Lewis 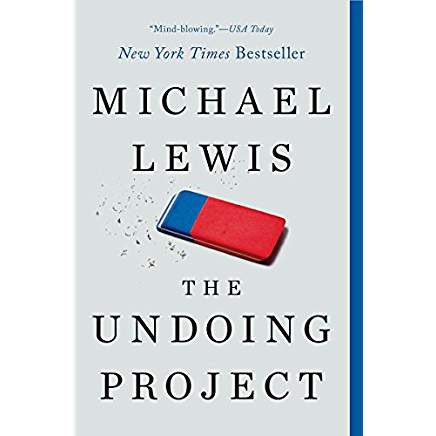 It’s challenging to write well about science. (Most scientists can’t do it.) On the other hand, financial journalist Michael Lewis (The Big Short, 2010) could probably write a riveting account about anything, including faculty meetings. In his latest book, The Undoing Project, Lewis charts the great friendship and collaboration between two Israeli-American geniuses. Psychologists Amos Tversky and Daniel Kahneman empirically demonstrated not only cognitive bias, but also the fallacies of intuition. They showed, in brilliant study after study, that human rationality is itself often a fiction. (Poets and artists have always know this, but it is still news to scientists and many academics.) Their research on decision-making and judgment revolutionized the fields of cognitive psychology and behavioral economics, and, counterintuitively, transformed political science, medicine, and even sports (see Lewis’ Moneyball: The Art of Winning an Unfair Game, 2004). Like atoms, Tversky and Kahneman bonded; their conversations were electrical. As we know from Ecclesiastes 4: 9-12, "Two are better than one; because they have a good reward for their labour.” In addition to revealing remarkable scientific concepts, The Undoing Project also tells a love story — a love of learning, a love of sharing, which, unfortunately, like many such adventures, ends sadly. A marvelous read, full of passion for both knowledge and camaraderie.