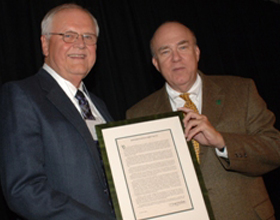 Jon Cohen '60, '61Tu (right) was presented the 2006-07 Dartmouth Alumni Award by President Wright during their class Reunion in xxxxx.

Jon, you lived in many different towns as a child, a result of your father's career in hospital administration. Your teenage years found you in Hampton, Virginia, where you accepted a summer job at the WT Grant Company store. Tom Papst '52 was the manager there, luckily for you and for Dartmouth. Unfortunately for Yale, you mentioned to Tom that you planned to apply there, causing a verbal tirade which you fondly recall to this day. He must have been convincing, because your plans quickly changed and you arrived on the Dartmouth campus, sight unseen, during the fall of 1956.

Immersing yourself in campus life, you participated in the Naval ROTC program, and served as corresponding secretary of Phi Kappa Psi fraternity. Dartmouth radio became your passion. You worked tirelessly as program director during the first year of WDCR's life as the only commercial AM radio station run entirely by college students. A government major, you quickly decided that you wanted to earn not one, but two, degrees from Dartmouth, and you entered the 3-2 program, receiving an MBA from the Amos Tuck School of Business Administration in 1961.

Following your graduation from Tuck, you served as a lieutenant in the U.S. Navy. A career in finance followed, with five years at the Irving Trust Company before a relationship with Goldman Sachs that continues to this day. Your career at Goldman Sachs has been distinguished, as you've risen from associate to vice president and partner. Currently, you serve as an advisory director of the firm.

Throughout the years, you contributed to a wide variety of civic organizations, serving as a member of the Friends Seminary Committee, former trustee of Oberlin College and the First Presbyterian Church in the City of New York, and current trustee of the Pennsylvania Academy of the Fine Arts and the Wildlife Conservation Society.

Given all the demands of career and community, you have still expended an extraordinary amount of effort giving back to your alma mater. Your experience at Tuck had a profound effect, motivating you to contribute more than forty years of volunteer service there. Your roles have included Tuck class head agent, chairman of Tuck Annual Giving, involvement in three capital campaigns, and membership on the Tuck Board of Overseers, serving as chair 1995-2001. Currently, you are a member of the Campaign for Tuck Steering Committee and the Tuck Leadership Advisory Board. You were honored in 1999 with the Tuck Distinguished Alumni Award and in 2002 with the Tuck Overseer's Medal. In addition, you represented Tuck on the Dartmouth Alumni Council, serve on the President's Leadership Council, and recently participated in the reorganization of the Hop-Hood Board of Overseers. You chair the newly constituted Hood Museum Board of Overseers.

With all of these accolades, perhaps the truest glimpse of your character and values is revealed through this anecdote:In 2002, at the encouragement of your mother, you contacted Tom Papst and made arrangements to meet him in Hanover at his 50th reunion. Forty-seven years later, you wanted to make sure that you personally thanked this man for the impact he had made on your life through your decision to attend Dartmouth.

In recognition of your professional accomplishments, your commitment to community, and your support of your alma mater, we are honored to present you, Jon, with the Dartmouth Alumni Award.