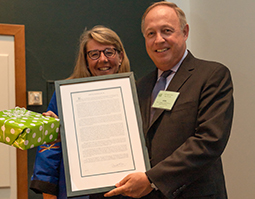 Raised on the South Side of Chicago, you have noted that the first mountain you ever saw was in the Upper Valley when dropping off your older brother, Toby '68, M'70, for his freshman year at Dartmouth. You were thrilled to follow Toby to Hanover the following year with brother, Mike '71, not far behind.

As an undergraduate, you took advantage of the many opportunities available both in and out of the classroom. The numerous leadership roles you held on campus included election to the Judiciary Committee of the Undergraduate Council, rush chair of Phi Delta Alpha fraternity, president of Dragon senior society, and member of the Presidential Analysis Committee which was formed to consider the role of the presidency over the next decade when President Dickey announced his retirement. In addition, you participated on the basketball team playing for Dartmouth coaching legends "Doggie" Julian, Tony Lupien and Dave Gavitt '59. A Navy ROTC student, you served as executive officer under your close friend and commanding officer, Sandy Alderson '69. Excelling academically, you majored in government, graduating Phi Beta Kappa. A classroom highlight was your math class taught by John Kemeny that was so popular, it had to be held in Spaulding Auditorium. One of your more unique experiences occurred sophomore fall when you participated on a trip to the Dartmouth Grant with President Dickey, who regaled your small group with his storytelling. Raised in a family of seven, you had washed plenty of dishes in your time and did not have much appreciation for this chore until you helped President Dickey clean up that evening and he mentioned that it was one of his favorite things to do because "it has a beginning, you make progress, and it has a visible end."

Upon graduation, the United States Navy commissioned you as an ensign and sent you directly to Harvard Law School. Additional promotions followed as you rose to lieutenant, received your law degree, and served as a trial defense counsel in the United States Navy Corps. Once your military duty was completed, it was back to Chicago to launch a spectacular career in law. For the past thirty-three years you have worked at Jenner and Block, LLP where you are a partner specializing in business litigation and trial work. This passion for the law inspired you to found the Dartmouth Lawyers Association in 1985, and you have served as a director of this active alumni group since that time.

Having received a Dartmouth Club of Chicago scholarship as a student, you have spent many hours trying to provide this same financial support to current students. Your fundraising volunteer positions have included returning to that club as scholarship fund chair; supporting your class as class agent, leadership agent and member of reunion giving committee; and co-chairing the Dartmouth Parents and Grandparents Fund Committee with your wife, Julie. As impressive as this massive list is, your most impactful and selfless volunteer contribution began in 2008. Concerned about alumni governance issues, a lawsuit filed by the Association of Alumni Executive Committee, and contentious trustee elections, you ran for the presidency of the Association of Alumni. The extraordinary amount of time that you expended over the next three years resulted in the dismissal of that lawsuit, a revised Association of Alumni constitution that was approved by 81% of alumni who voted in the election, and a fair and transparent trustee election process that significantly impacted the historical course of the College. There are no words that can adequately describe our gratitude for this massive contribution. During this time period, you also served on the Alumni Council and the Alumni Liaison Committee to share alumni sentiment with the Board of Trustees.

When John Mathias speaks, his Chicago accent leaves no doubt as to where he is from. Your roots run deep in Chicago where you are no less involved in your community. Support of education, the arts, and the law are apparent as you have been a trustee of the Latin School, a lifetime trustee of Fenwick High School, a board director and president of the Harvard Law Society of Illinois, a director of the Chicago Sifonietta, and a member of the American Bar Association Section of Litigation Leadership Council.

Of course, all of this does not compare to the main reason alumni are in awe of you. The real reason relates to the fact that you and your incredible wife, Julie, produced five children in 3 1/2 years which eventually resulted in five Mathias children being enrolled at Dartmouth within a very short period of time. Alice '07 led the pack, followed by twins, Teddy '09 and Pete '09. Right on their heels were twins, Marian '11 and Johnny '11. Like their father, the Mathias children have added much to the Dartmouth community, including the popular band, Filligar, which Johnny, Teddy, and Pete formed and we continue to follow while wishing them the best in their musical careers.

The legendary UCLA basketball coach John Wooden once said, "Winning takes talent; to repeat takes character." John Mathias, you have been a repetitive winner throughout your life and this reflects your strength of character and strong sense of what is right and just. In appreciation of the dedication to your alma mater, profession, family and society, we are very proud to honor you with the presentation of the Dartmouth Alumni Award.