"The Kenyan educational system wasn't a good fit for me," Kevin Mwenda '10 told Dartmouth Alumni Council members gathered for a panel presentation on the international student experience on campus. "As soon as I finished high school, I talked to people about what it'd be like to study in another country. I connected with United World College and went to a school in Canada for two years. Then I came to Dartmouth. And when I got here, I thought, 'Wow! Welcome to life.'" 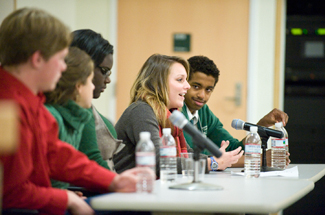 Councilors met with students in meetings on various aspects
of campus life, such as the international student experience
and the issues of social space and alchohol use. Here,
students talk with Dean Tom Crady and the council Student
Affairs Committee about space needs on campus.
photo: Jeff Woodward

Mwenda's words might easily have been echoed by the 94 members of the Alumni Council who came to Hanover for the council's 197th biannual session, December 4-7.They gathered with students in the international panel and other meetings, with Hill Winds Society students at dinner, and with faculty for lectures. They had discussions with the Dartmouth executive vice president for finance and administration on upcoming operating-budget cuts; with Dartmouth trustees on the presidential search and the budget; with the dean of the College on campus alcohol policy development; with the vice president for Development on the capital campaign; with the Athletics administration on new facilities and the 2009 Wearers of the Green ceremony; and with the Association of Alumni president on proposed association constitution changes coming up for alumni vote in the spring. Dinner with President James Wright '64a, presentation of the council's 2007-08 Dartmouth Alumni Award to Karen McKeel Calby '81, and songs by the Dartmouth Aires added a festive air to the intensive weekend.

Clearly, for alumni whose love of Dartmouth embraces not just the College's yesteryear but its life today, council membership is a sure way to be in the thick of what council president John Daukas '84 described in his opening address as "the golden age of alumni relations with the College."

Mwenda was joined on the international students panel by Helen Chow '09, from Hong Kong, and Kevin Jackson '10, from Venezuela, who is the president of the International Students Association on campus. Chow listed "SNL, the difference between Democrats and Republicans, Sunday Night Football, NAFTA, and NASCAR" as "things I don't really know about," and said at one point she "was feeling very isolated, coming from a collectivist culture to an individualist culture." Things began to change for her when she joined a sorority and became involved in the Studio Art Department. "The art professors are so available, on Blitz and sometimes coming by the studio at 2 am, working with us," she said.

Seeing Ethics as One of the Essentials of Life

Professor Aine Donovan is a very talented lecturer, and her topic was quite interesting to me. I was disheartened by her description of the rise of relativism in our society, the apparent erosion in opportunities for character and ethics training young people in the United States outside of religious institutions, and the willingness of many parents to excuse and even defend unethical conduct by their children/young adults. Professor Donovan, however, stressed the importance of having ethics training in our education system and argued that it was essential that students and other citizens be prepared to make moral judgments in their daily lives, and make them. It was encouraging to hear that in her judgment, cheating rarely happens at Dartmouth and she is convinced that cheating is widely viewed by the student body as wrongful, "uncool" conduct.

Three faculty gave lectures at this council session: Christian Jernstedt, professor of Psychological and Brain Sciences, discussed the leading research on how we think and why it's sometimes disturbingly like rats; Aine Donovan, director of the Dartmouth Ethics Institute and research associate professor, discussed how the concepts of honor and integrity are defined in a relativist culture; and Don Pease '68a, professor of Englishand Avalon Foundation Chair of the Humanities, told the life of Norman Maclean '24 and discussed the death-defying art of Maclean's beloved novel, A River Runs Through It.The talks were offered as samples of the diverse lectures available through Alumni College at Reunion, held annually in the spring by the Alumni Continuing Education Unit of the Alumni Relations Office.

Getting an up-close look at other areas of student life, the councilors heard from Tom Crady, dean of the College, on the development of campus alcohol policy. Crady noted recent slight declines in Dartmouth students' drinking rates, for example, an increased abstention rate and a dip in the rate of binge drinking (such as "preloading" on five drinks before heading out to a party or game) from 57 percent of students in 2004 to 44 percent, approximately the national average, in 2008.

Crady said there are "too many factors involved" to present specific reasons for the decline, but he cited various "trust-building" strategies, including the Good Samaritan policy, which encourages students to call for help for other students free of consequences, and the increased diversity of the student body, since different student groups differ in their alcohol consumption rates. Peter Elias '69, class Webmasters representative, noted that it might be a statistical outlier.

Despite the declines, Crady noted, almost half the student body still engages in binge drinking.He's increased education on alcohol-related state and town law, having met with many students who said they've had much less education on this than on alcohol's effects on the brain. In addition, he said, "Prevention has to be environmental, in terms of alternative building spaces. The need for this is particularly high here. Right now, Dartmouth doesn't have the infrastructure to give students space to have get-togethers on their own that don't involve alcohol. Without these, students will do what they normally do."

Student alcohol use was also discussed at the meeting of the council's Student Affairs Committee, which several students attended. For first-year councilor Susan Hess '81, at-large representative for alumni clubs, this meeting was especially informative. "The students were extremely articulate," she said, "and gave us great insight on the need for further social venues on campus, including more sororities and spaces for non-Greek social activities. "

Among the many council committees that held meetings was the new ad hoc Committee to Support Greek Letter Organizations. Formed as a follow-up to a panel on Greek organizations held during the 196th Alumni Council session in May, the CSG hopes to "help fraternities and sororities flourish by helping them fix and maintain their physical plants, assist in increasing the number of sororities on campus, and perhaps assist in improving a variety of cultural issues as well," said Daukas, who is on the committee. The CSG includes a number of other councilors, Dean Crady, other administrators responsible for student life and Greek letter organizations, house advisors, and a student.

Discussing the College's plans around the approximately $40 million cut in the its operating budget, the specifics of which will be announced in February and take place over two years, Adam Keller, executive vice president for finance and administration, told the councilors it was the result of a confluence of events. Two and a half years ago, he said, "when we were in the middle of the capital campaign, with a lot of momentum going, and the College's endowment was performing strongly," decisions were made to spend more aggressively "to expand the faculty, enhance financial aid packages, and improve facilities." A planning period preceded implementation, which began in July, only months before Dartmouth, like other schools, saw a drop in its endowment as part of the national economic recession.

Tenured and tenure-track faculty and financial aid will not be affected by the cut, Keller said. Beyond that, reductions will be significant. Other faculty, administration, and staff will see layoffs, compensation and programs will be cut, processes will be examined with an eye toward increasing efficiency, and building projects will be slowed or postponed."We're not just taking fat out of our budget," Keller said. "We didn't have much fat in our budget."He took councilors' questions on the likelihood of tuition increases (not impossible), the extent of the college's exposure to subprime debt ("very limited"), the fiscal challenges of a year-round academic schedule, and more budget specifics. Keller noted that 8-10 percent of the operating budget comes from the Annual Fund, and Daukas pointed out that 92 percent of the Alumni Council donated to the fund last year. He encouraged the council to make it 100 percent this year.

Asked by Peter Roby '79, at-large representative, asked whether the budget crisis is affecting the search for the next president, to replace President Wright when he steps down in June, the trustees agreed that the economic climate is probably not a factor. Haldeman noted that Dartmouth is in a more attractive position than other institutions, because it's grown its faculty and their salaries, and its capital campaign is close to its goal. Mulley said that "not many institutions have had the scale of facility construction we've had during Jim Wright's tenure, putting $1 billion in the ground," and Fernandez pointed out that Dartmouth only increases its attractiveness in taking action on budget issues now, and not leaving them for the new president.

In terms of a practical impact, though, Mulley said the economic climate has made it a little more difficult for the search committee to reach presidents and provosts at other institutions as part of its networking process, as everyone deals with the economic situation. But he emphasized that the committee is on track to begin interviewing about a dozen candidates in late January.

Other councilors had questions related to College governance. Kaja Fickes '95, Class of 1995 representative, asked whether the presidential search is being affected by the filing last month of a second lawsuit against the College by a small group of alumni who want to require the board to maintain parity between the number of alumni-nominated and charter trustee seats on the board.

"Some candidates have mentioned it," said Mulley, "but it doesn't seem to be a major concern, given the impact of the alumni vote last June. That was huge."

During the session, the council members voted on and approved a resolution opposing the second lawsuit and calling for its immediate withdrawal.

In accepting the 2007-08 Dartmouth Alumni Award at the council's Friday night dinner, Karen McKeel Calby '81, whose immense volunteer service to the College includes a term as council president, told the councilors she had a wish for them:

"My wish for each of you is that you fully embrace the council's greatest gift--the ability to step back into campus life," said McKeel Calby. "Not like it was years ago for you, but as it is today. Doing this during my years on the council confirmed what I intuitively knew 30 years ago: Dartmouth is a special place. I know now that the special draw of Dartmouth is not because of my experience as a student, or yours, but rather because of the cumulative experience of students for the past 240 years and the way the College's extended community--her alumni, faculty, and administration--strives to ensure that Dartmouth will remain that same special experience for generations to come."

Clearly, the councilors had already taken that step.

Deborah Klenotic is the editor of the Alumni Relations Office Web site.