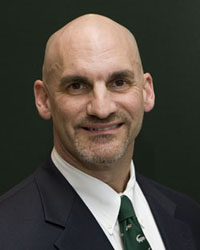 to the Alumni Council and was in Hanover for the May council meeting," he says. "I was chairing our class's 25th Reunion, which was in June. And I was finishing up my service as class secretary.

"All my volunteer service was going to end on June 19th," Silverman continues, "and I was imagining what I'd do with the extra time."He muses, tongue-in-cheek, "Take up guitar, maybe."

His fellow councilors, however, had other plans for Silverman--and voted him president-elect of the Alumni Council. His term as president began this July 1.

When Silverman describes his 26 years of alumni volunteer service, much of it seems to have unfolded with this kind of informal serendipity, and he tends to downplay his contributions.

He'll say, "After I graduated, friends talked me into doing the fundraising telethons, and I didn't mind. It was mostly making phone calls, and I could do it--I was in medical school, and there wasn't a lot happening."

And, "I made the mistake at our 10th Reunion of telling Pat Berry '81, our class president, that my residency was ending, and I was happy to help if she needed any help. Later, Pat called and said, 'Do you still want to be Reunion chair?' That's how I ended up chairing our 15th Reunion." 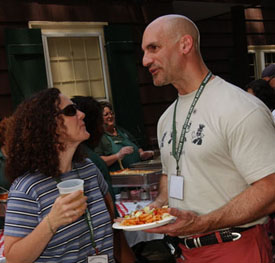 been an interviewer for Admissions; a telethon chair, assistant head agent, and class agent for the Alumni Fund; and the secretary, president, and--twice--Reunion chair for the Class of 1981. He served a three-year term as a member of the Alumni Council before taking the president's post.

Meanwhile, in his other life, Silverman over the years established a successful cosmetic and reconstructive plastic surgery practice in Boston, where he's now on staff at the St. Elizabeth's Medical Center and a member of the faculty in the Division of Plastic Surgery at the University of Massachusetts, Worcester. Every year he also heads a volunteer surgical team that travels to Ecuador to perform corrective surgery on patients with congenital and traumatic head, neck, and hand deformities. A lifelong fitness enthusiast, Silverman is also a bodybuilder and snagged third place in the World Natural Bodybuilding Federation Mr. Universe competition.

Reconstruction skill may be just what Silverman needs as he leads the Alumni Council into the thick of perhaps its biggest reorganization in its 94-year history, begun last fall with the drafting of a new mission statement.

He's up to the task. "My service to Dartmouth has been primarily my involvement with my class, and it's always been very task oriented. I like to bring people to the table and get things done."

Among the first things Silverman has done as president is request that all councilors increase their communication with their alumni constituents, including encouraging alumni to participate in a Dartmouth community survey that the Board of Trustees is conducting in a study of the board's size and composition and the method of trustee selection. Silverman has also charged councilors with encouraging and helping alumni classes to follow a more democratic election process in choosing council representatives. Many classes struggle to find enough volunteer leaders in general and consider it unfeasible to try to formally elect, rather than informally select, their council representatives.

The Orientation Committee, of which Silverman is a member, has been charged with brainstorming ways to get incoming councilors up and running faster, and the new Advisory Committee on Council Structure has an October deadline to propose amendments to the constitution that would overall "make the council a better body," says Silverman. "For example, having each class up to 50 years out have its own council representative [rather than one representative for two successive classes, as is the current structure], possibly lengthening service on the council to five years, and changing the council's committee structure."

Silverman would also like to see Association of Alumni members in the council's College Relations Group and is pursuing a close working relationship with the association's Executive Committee.

"I'm a consensus builder," says Silverman. "No one can come with a monologue, but no one's turned away who's interested in dialogue."

He hopes to present a set of amendments for vote by members at the Alumni Council's next semiannual meeting in December.

So while he occasionally finds quiet time at home in Charlestown, Massachusetts, in the company of his two 16-year-old cats--"neither of whom were talented enough to complete the application to Dartmouth," he says--it seems Silverman's guitar-strumming days are a ways off.

"I came to Dartmouth from a small town in western Pennsylvania," says Silverman, who as a student was an active member of Zeta Psi and the Aires and worked as a German teaching assistant. "And I don't think I've changed as drastically in the last 26 years as I did during my four years at Dartmouth. Being a volunteer, and helping to bring people together, is how I give back."

He recalls a "volunteer moment" he had while chairing the 25th Reunion of the Class of 1981 last year: "We were all, classmates and families, sitting on Baker lawn, and it was twilight, and we were listening to Professor John Rassias's voice booming out. I was sitting next to Helene, his daughter, and at one point we looked at each other with the same thought: 'This is what it's all about.'"