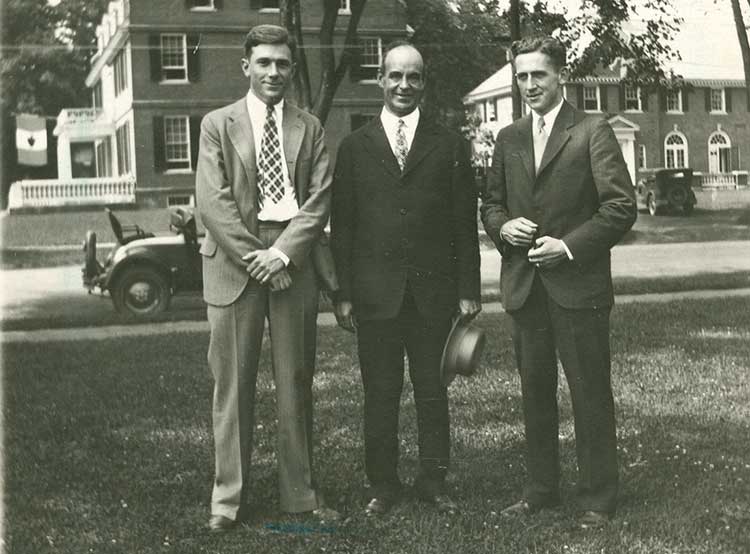 The first president of the Alumni Council, Ernest Martin Hopkins, Class of 1901, (middle) stands with two other alumni leaders, sometime in the 1920s. After he was council president, Hopkins served as president of Dartmouth from 1916-1945. On the right is Sidney Hayward, Class of 1926, who was secretary of the council and longtime council historian. Robert Strong, Class of 1924, was a dean of admissions and administration for Dartmouth. (photo: Dartmouth College Library)

Alumni are "the end, the aim, and the means of the College." -Ernest Fox Nichols, 10th Dartmouth president, at the first meeting of the Alumni Council

One hundred years ago, a group of devoted Dartmouth alumni decided that simply being proud of their alma mater wasn't enough. They wanted to form an official organization, and to meet twice a year, to discuss and implement ways to be even more supportive of Dartmouth College. So, on November 7, 1913, at the Bellevue-Stratford Hotel in Philadelphia, alumni held the first meeting of the Dartmouth Alumni Council meeting.

It was a novel idea. The Boston Daily Globe, Christian Science Monitor, and the Washington Herald reported on the council's founding, with the Globe referring to it as "a body of 25 representative graduates recently created by the general alumni to advance the interests of the institution." The Dartmouth reported that the group "is absolutely unique among the colleges of the country and it is attracting much attention among eastern institutions. Great importance and significance is attached to this council."

"The Dartmouth Experience has built an army of tens of thousands whose leaders in class and regional affairs, on the Board of Trustees, the Alumni Council, and other organized groups, have with their own lives woven bright threads into the fabric of the College and the pattern of its life. This is the unique strength of Dartmouth."

-Sidney Chandler Hayward '26, secretary of the College, in his 1958 history of the Dartmouth Alumni Council

With its members representing diverse regions of the country--including California, Colorado, Nebraska, and Texas--the council infused a new enthusiasm among alumni. In the opening of the December 1913 Dartmouth Alumni Magazine, the editors wrote: "There is a new spirit abroad in the Dartmouth alumni; a spirit of intelligent inquiry, and of service based on knowledge. This was manifest at the meeting of the council; it will become more manifest as the individual members of that body move about among their fellows in localities widely separated."

While adapting to modern issues, the council's structure has remained remarkably consistent over the past century.

Three Dartmouth presidents--past, current, and future--addressed the council at that first meeting, which lasted from 7:30 pm to midnight. President Ernest Fox Nichols spoke of the importance of the alumni body (see quote above), and Ernest Martin Hopkins '01, Dartmouth's eleventh president, read a lengthy history of alumni written by William Jewett Tucker, the College's ninth president. Tucker said of the council, "There is great need of some agency which shall support in substantial and effective ways the purposes and plans of the College as expressed through its administrative board."

Denver's Richard C. Campbell, Class of 1886, helped close the meeting by saying, "I would have Dartmouth known as an ambitious man's college. And once that reputation is clearly attained, you can not build a wall around the institution high enough to keep out the best youth of the land."

The council's health and its century of success can be attributed in part to the leadership of its first president, Hopkins, who went on to serve as Dartmouth president from 1916-1945. Hopkins had a clear vision for the council, and his appreciation for Dartmouth alumni may have been unmatched in the College's history. After he retired, Hopkins wrote, "If I've ever made a contribution to Dartmouth College I think it is founding the Dartmouth Alumni Council." 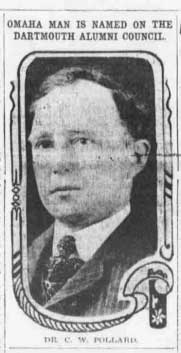 In 1913, the Omaha Daily Bee featured one of the first members of the council, C.W. Pollard, Class of 1895. (photo: Dartmouth College Library)

The wise counsel of Hopkins, and of hundreds of alumni councilors after him, is one reason why the council has been so valued by the College community. Over the years, Dartmouth presidents and other leaders have called on councilors to provide essential support on a variety of critical issues, such as the reintegration of World War II veterans to Dartmouth, the College's transition to coeducation, and the ethnic and economic diversity of the student body. For 100 years the council's committees on fundraising, communications, and enrollment have provided quiet, meaningful support to these critical areas of College operations.

Today 126 members of the Dartmouth Alumni Council continue to stand for their alma mater as proudly and devotedly as those 25 pioneering alumni founders. A talented, diverse group, the 2013 councilors represent not only geographic areas, but classes, the graduate and professional schools, and other Dartmouth alumni organizations, such as the Black Alumni of Dartmouth Association; Native American Alumni at Dartmouth, the Dartmouth Gay, Lesbian, Bisexual and Transgender Alumni/ae Association, and the Dartmouth Association of Latino Alumni. The council will celebrate its anniversary during the October 24-25 meeting.

Mark Davis '81, '84Tu, who began his term as council president on July 1, 2013, says, "It is a testament to the leadership and commitment of all of our Alumni Council predecessors--from 1913 to today--that we have such an outstanding organization in place, and one that continues to thrive and grow. The Dartmouth Alumni Council has never wavered from its mission of enhancing and inspiring alumni involvement that furthers the mission of the College." 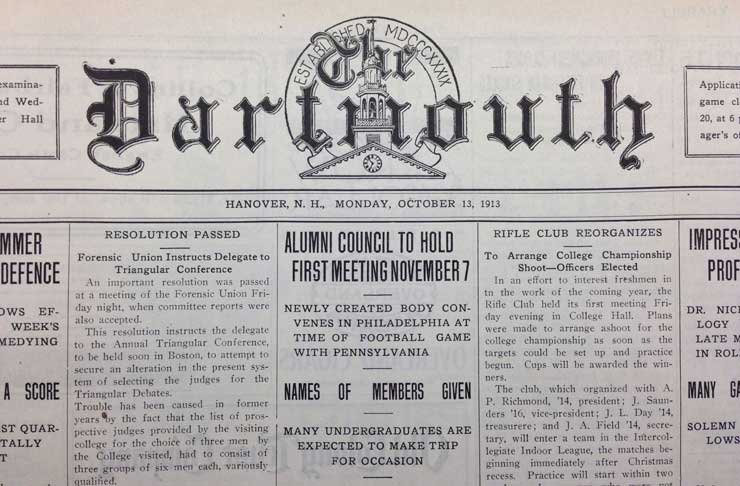 The student newspaper extensively covered the founding of the Alumni Council.