In response to questions from alumni regarding the proposed amendment to the Association of Alumni constitution, Association president John Mathias Jr. '69 and Alumni Council president
JB Daukas '84 have prepared this set of answers to frequently asked questions. All alumni can vote on the amendment during the Association election period, March 25 - May 6, 2009. For detailed election and voting information, visit Vox the Vote.

1. What is the objective of the proposed amendment? 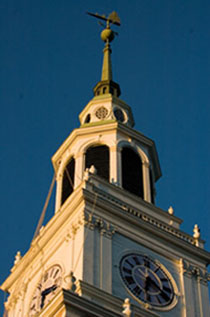 process by reducing the number of candidates nominated by the Alumni Council from three to one (or two candidates), instituting a "one person, one vote" voting system, requiring successful candidates to achieve a majority of votes cast, and preserving unchanged the petition process for nominations to the ballot.

2. How is this an improvement over the current
system?

Since its inception in 1990, many alumni have complained about aspects of the current system.First, requiring the Alumni Council to nominate three alumni candidates has resulted in a "churn and burn" phenomenon in which multiple, highly qualified alumni candidates are rejected in each election cycle.Second, the existing system uses an "approval" voting process through which alumni are asked to vote for multiple candidates for a single open seat.Many alumni find this confusing and inconsistent with the voting system with which they are accustomed: "one person, one vote."Third, the existing system has resulted in elections in which as many as four candidates have run for one open seat with the result that successful candidates sometimes have not earned a majority of the votes cast, but have been elected with a mere plurality vote.Some alumni have expressed concern that requiring the Alumni Council to nominate three candidates results in vote splitting and election of candidates who are not favored by the majority of alumni.Fourth, seven out of ten alumni have not voted in recent trustee elections.We hope that a simpler and more familiar election process will encourage greater alumni participation in the trustee nomination process.

3. Why are you proposing this amendment now?

Three reasons.First, the existing system has been the subject of alumni confusion and criticism since it was instituted in 1990.It is broken and needs to be fixed.Second, alumni leadership has had ongoing discussions with members of the Board of Trustees about the prospect of increasing the number of alumni-nominated trustees in the future.Improving the alumni election and nomination process will facilitate these discussions.Third, in September 2007, after conducting an exhaustive study, the Board of Trustees resolved that the existing alumni trustee election and nomination procedures needed to be improved.Until changes are made, the Board has determined that the College, and not the alumni, will run the alumni trustee election and nomination process.Alumni leadership would like to maintain alumni control over this process.

4. Are you changing a process that has been in place for over 100 years?

No. The current system has been in place only since 1990.Prior to 1990, the Alumni Council nominated one candidate.In most years pre-1990 there were no petition candidates and the sole, nominated candidate was accepted by the Board of Trustees. In rare instances, there were petition candidates, and in those situations there were head-to-head elections under a "one person, one vote" procedure in which the winner obtained the majority of votes cast.Arguably, the proposed amendment actually is returning to many of the procedures that were in effect during most of the time that Dartmouth's alumni have nominated trustees to the Board of Trustees.

5. Are any changes being made to the petition process?

No. The petition process under the proposed amendment would remain the same.

6. Why does the proposed amendment give the Alumni Council the option
of nominating one or two candidates?

7. What happens if there are more than two candidates, and no candidate
receives a majority of votes cast?

8. Why not have Instant Runoff Voting to ensure that an actual runoff
election is not required?

Instant Runoff Voting ("IRV") is a voting system that may be used where there are three or more candidates.Under IRV, voters are asked to rank the candidates on their initial (and only) ballot.In the event no candidate receives a majority of the votes cast on the first ballot, under IRV, the ballots are re-tabulated under the following process: 1) the lowest vote getter is eliminated from the election; 2) the votes received by the lowest vote getter are reassigned to the remaining candidates based on the second choice indicated on those ballots; and 3) all the ballots are recounted.

There is much to be said in favor of IRV, including that it is a mechanism for ensuring that the winner of an election is a candidate preferred by a majority of those casting ballots, and it does not require the time and expense of an actual runoff election.On the other hand, IRV voting has been criticized by those who opposed earlier efforts to reform the trustee nomination process, and IRV is arguably more complicated than an actual runoff.In order to keep things as simple as possible and in deference to earlier criticism, the Association of Alumni Executive Committee decided to propose actual runoff instead of IRV.

9. Does the proposed amendment affect campaigning?

10. Where there is more than one open seat, why not let candidates
run for all open seats, rather than pick one?

Where there are multiple open seats, we decided to treat each seat as a separate election such that each candidate is running for a particular seat and not for multiple seats at the same time.As a candidate can only serve in one trustee seat, it does not make sense to let a candidate run for multiple seats at the same time.We considered whether to allow all candidates simultaneously to run for all open seats, and to declare the highest vote getters to be the winners.We rejected this approach as it could lead to situations where those elected do not receive a majority of the votes cast.

11. Why not require petition candidates to declare their candidacy before the
Alumni Council determines whether to nominate one or two candidates?

12. Who was involved in drafting the proposed amendment?

13. What happens if the amendment fails?

In order to pass, the amendment must receive a two-thirds, super-majority of votes cast in an alumni-wide election this spring.If the amendment fails, the College will displace the Association of Alumni in running the alumni-nominated trustee balloting process; however, the Alumni Council will continue to nominate candidates.We believe that failure of the amendment would constitute a significant setback for the current alumni leadership in our ongoing discussions with the Board about the prospect of increasing the number of alumni-nominated trustees.