"This year has perhaps been one of the busiest in the history of the Alumni Council," president Rick Silverman '81 told councilors gathered in the Hanover Inn on the opening night of the 195th Dartmouth Alumni Council session, Thursday, November 29.

It was about to get busier. For two days, the councilors kept an intense schedule of back-to-back meetings, focused mainly on College governance and alumni leadership issues. They discussed at length how to improve their service as alumni representatives to the College, and toward that end overwhelmingly approved a new council constitution. They met with senior administrators and with students and administrators from the Office of Pluralism and Leadership. They questioned members of the Association of Alumni Executive Committee about the lawsuit that some of its members voted to file this fall in response to changes the Dartmouth College Board of Trustees made to its size and composition and trustee nomination method. And they met with trustees
Al Mulley '70 and Jose Fernandez '77. 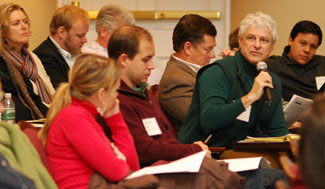 "We want to add our thanks to those expressed to you by President Wright," Mulley said in their meeting. "It's not the easiest time to be in an alumni leadership role, but it's one of the most consequential, perhaps in our lifetime."

Mulley noted there's "a strange paradox taking place that Dartmouth has never been stronger and yet is under criticism from some members of its family that has spilled into the media and the courts."

Membership on the council these days isn't for wallflowers: It takes a willingness to reach out to and serve alumni as sounding board, College liaison, and accurate information source at a time when assertions are flying in the press, and therefore it requires a good grasp of Dartmouth life today. Knowledge of the history of alumni leadership and Dartmouth governance--and who plays a role in each--is also needed. Practically speaking, it takes a lot of time: interacting with alumni, working on committee projects, and participating in the semiannual council sessions in Hanover.

Ninety-six percent of the councilors approved (3 percent opposed and 1 percent abstained) a new Alumni Council constitution that makes many changes in the organization's structure to expand and better define representation. "We wanted to make improvements to be more representative of the entire alumni body," said Martha Beattie '76, chair of the Ad Hoc Committee on Council Structure, which wrote the new consitution. "To do this, we needed to get our house in order."

The council will increase from 101 to 120 members. Among the many changes, every class through 55 years out will have its own representative; representatives from the alumni affiliated groups and graduate/professional schools will be increased; and the number of at-large representatives will decrease from 21 to 6. (Six at-large seats were kept to allow the council to pursue diversity in skill sets, geography, race, gender, age, etc.).

The College Relations Group will be replaced with a new Alumni Liaison Committee, composed of the council president, president-elect, and past president; the Association of Alumni president and two past presidents; three councilors elected by the council; and three alumni elected by the council from the alumni body. Silverman called the Alumni Liaison Committee "the continuing evolution of the College Relations Group. It'll collect alumni views from councilors, synthesize them, present them to the trustees and administration. This is a huge improvement--getting alumni feedback to the appropriate places, so that councilors can respond to issues."

John Engelman '68, Athletics Council representative, pronounced the new constitution "outstanding, much better than anything we had before."

Louisa Guthrie '79, the new Classes of 1979 and 1980 representative, was one of many first-time councilors who arrived in Hanover having already been in touch with their constituencies: They'd shared the trustees governance report in the fall and solicited feedback on it, and they'd contacted alumni more generally. Having new councilors hit the ground running was the result of a dramatically ramped-up orientation process put in place by the Orientation Committee, chaired by J.B. Daukas '84, council president-elect.

Guthrie sat in an orientation meeting with a large binder before her that contained, among other materials, a paper covered with a handwritten list of names of about forty alumni and, next to them, their questions. "I sent an email on Monday to the classes, saying, 'I'm going to Hanover for the council meeting this weekend. Do you have any thoughts, opinions, questions you'd like me to share?'" Guthrie responded to every email she received. "Many were asking about governance matters, with about 50-50 pro-con on the board of trustees expansion issue. But they also expressed other interests, related to fundraising communications and other areas.

"I'll tell you what I've committed to them: to investigate and share the facts and, second, to share my own views on them," said Guthrie. "I'm on the Student Life Committee, and looking forward to getting the pulse of campus. You want the truth as opposed to the stories.

"It's a tough time because of the governance issues," said Guthrie, "but I'm glad there's so much happening. It makes it even more rewarding to be on the council."

Questions for the Association of Alumni Executive Committee

In a meeting with Association of Alumni Executive Committee members Bill Hutchinson '76 (president), Frank Gado '58 (second vice president), David Spalding '76 (secretary/treasurer and vice president for Alumni Relations), and Tim Dreisbach '71, councilors asked many questions about the lawsuit, particularly about its secret financial backing and whether the suit represents the majority alumni view. 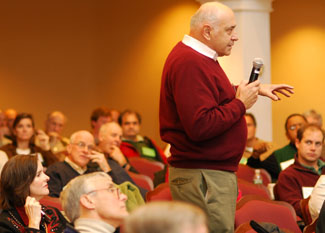 New councilor Elliot Weinstein '56, '57Tu, Classes of 1955 and 1956
representative, takes his turn at the 195th council session, one
that left no question unasked. Photo by Kawakahi Kaeo Amina '09

Hutchinson said that he'd requested documents to identify the source of the funding, but was declined. "I was told I'm not the client," he said. There's no discussion of the funding by the executive committee members, he said, because "all communication about the lawsuit has been vested in Frank [Gado]."

Former councilor Bill Montgomery '52 read from a copy of an email sent by an alumnus to alumni, soliciting contributions to an account set up for the filing of a lawsuit in the name of "Dartmouth Defense Fund" at Donors Trust. The fund had been created by someone named Fred Fransen, who is not an alumnus. "In addition," said Montgomery, "I'm sure you're aware that in September the Hanover Institute sent a letter to their mailing list, asking for donations for the lawsuit?" Spalding noted that Gado is on the board of the Hanover Institute.

Asked by Mike Choukas '51, ex officio former councilor, to what extent non-Dartmouth funding is involved, Driesbach responded, "If outside interests are in agreement with our belief of what's in the best interests of the College, what is the problem with that?"

Many councilors voiced their alumni constituents' and their own opposition to the lawsuit and said the Association of Alumni Executive Committee didn't act on their behalf. For example, David Bradley '58, Classes of 1957 and 1958 representative, said he surveyed those classes, asking what they thought of the lawsuit, and of more than 150 alumni who responded, 70 percent were against it.

The considerable opposition to the suit among alumni raises the question of which organization represents alumni to the College. Although President Ernest Martin Hopkins, Class of 1901, established the Alumni Council in 1913 as the official representative of alumni, whose numbers were growing, Driesbach said the association and the council use the word representative to mean different things. "To the council, it means serving as a clearinghouse of alumni sentiment, but to the association it means governance," he said.

Hutchinson distanced himself from his fellow association officers. "Anyone who is curious to know my perspective on the structure of our organizations need only look at the constitution that the Alumni Governance Task Force--Anton, J.B., and others of us--worked on that would've made the association the umbrella group and the council under it."

With the defeat of that constitution in 2006, Hutchinson said, "We're back to the status quo, trying to figure out the function of each. But the association is falling apart, and I don't see it being a credible partner in the organizations we need and deserve. I hope the Alumni Council can carry the water for all alumni."

Questions for the Trustees

The councilors also had questions for trustees Mulley and Fernandez, touching on academics, campus building projects, and the lawsuit. Asked how the suit is affecting the internal dynamic of the board, Fernandez replied, "The business of Dartmouth is not litigation; it is turning out the wonderful students it does. And it continues this work, like corporations do, who have suits going on all the time and continue working."

Engelman asked whether there are plans to expand graduate arts and sciences programs in conjunction with building the new life sciences facility, to which Mulley responded in a word: "No."

Dave Dookeeram '99, at-large representative, asked whether the trustees have given any thought to improving alumni career advising, and Mulley said it's a subject of interest but hasn't yet become the priority that undergraduate premajor and career advising is.

Richard Allen '75, at-large representative, said, "No one disagrees with the trustees' September resolution that teaching and research are synergistic, but does the College acknowledge and address the need for communications training, such as speaking training, for faculty?" Mulley said tools in this area are among many provided to faculty by the Dartmouth Center for the Advancement of Learning, a leading-edge faculty resource center in Baker-Berry Library.

"I'm very excited about the possibility of expanding the sophomore summer experience to include community service," said Sarah Hoit '88, Classes of 1987 and 1988 representative. "To what extent has the board considered taking a topic such as community service and incorporating it into the summer program?"

"This touches on the role of the trustees versus the role of the academic deans," said Mulley. "It's going to be the faculty who decide whether to take this on. Our role is to make sure there are incentives for this kind of creative thinking." 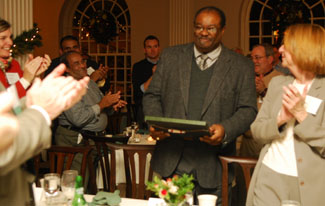 Nels Armstrong '71 was honored for his extraordinary service to the
Dartmouth alumni community, including 13 years as director of the
Office of Alumni Relations. Photo by Kawakahi Kaeo Amina '09

No Question: Honoring the
Giants among Us

On Thursday night, Nels Armstrong '71, who is now special assistant to the president, was thanked for his extraordinary service to the alumni community and College, including 13 years as director of the Office of Alumni Relations. On Friday, Dartmouth Alumni Awards were presented to Peter Fahey '68, '70Th and Leo McKenna '56, '57Tu for many years of what can only be called extreme service to Dartmouth. Accepting his award, McKenna said, "I think there are many more alumni who are more deserving, but I am going to take it home."

They Who "Love Dartmouth All the More Now": Ten Receive 2007-2008 Alumni and
Young Alumni Awards from Dartmouth Alumni Council