An Onward and Upward Feeling: A Councilor Goes to Class

I attended two classes during Alumni Council weekend. The first was Democracy in Developing Countries, taught by Professor Misagh Parsa. The professor asked me to introduce myself, and when I did, I said that I was from the Class of 1977, one of the first four-year classes of women at Dartmouth.

There were 18 students, and everyone was gathered around a table. The topic was Iran in the 1960s, and I came away with a much better understanding of how that period shaped the Iran we know today. There was a lot of class participation, and the students were articulate and prepared. At one point, Professor Parsa asked why things in Iran didn't improve once all the oil money came in, and one student—she sounded like an economics major, maybe—gave a sophisticated explanation of how the money didn't flow equally to all parts of Iranian society, and how in a short time inflation kicked in, exacerbating the discrepancy between the haves and have-nots. I was impressed with the whole dialogue and wished I could've stayed in Hanover for his next lecture.

The next class I attended was larger, about 40 or 50 students, in a lecture format. It was an anthropology class taught by Professor John Watanabe. It left me with a number of ideas worth thinking about regarding the concept of work—job versus career; cultures that work to meet basic needs versus those that see work as a calling, for the reward of an onward and upward feeling; the importance of the produced goods versus the value of the workers who produce them. We learned that the concept of work has changed over time and that many misunderstandings among cultures have stemmed from differing belief systems regarding work.

Here's something I thought was nice: I'd actually wanted to attend a different class, but when I arrived for it, the room was dark; I think the class had been relocated or rescheduled. Because I didn't want to walk into a class late, I wanted to quickly find another class in the same building, so I asked a student what class she was going to and whether it was any good. She said, "My class is great! The professor is wonderful.You have to come, and I'll introduce you to him.” And that's how I ended up in the anthropology class.

With Dartmouth life today much on their minds, the Alumni Council filled their 194th meeting, May 17–19, with dinners and discussion groups with students; panel presentations from several student organizations; and classes. In addition, the call for increased communication that was made at the 193rd meeting in December was followed with reports of new communication projects and plans for more. Approval by vote of a draft mission statement for the council marked the first milestone of an organizational self-evaluation process launched at the previous meeting, and president Martha Beattie '76 invited councilors to move on to examining the council's structure with the goal of improving its historic function as the main communication conduit between alumni and the College. With the May 15 election of a new Dartmouth trustee in the headlines—petition candidate Stephen Smith '88 won the seat over three candidates put forth by the council's Nominating Committee—the councilors heard an impassioned report from Rick Routhier '73, '76Tu, nominating chair, on the structural challenges the committee faces in carrying out its constitutionally required role in the trustee nomination process. Three trustees took some time during the board panel that is a regular part of council meetings to speak to this issue.

Learning and Knowing Dartmouth: “We're Not a Monolith”

The council kicked off in earnest Thursday evening, with four student–councilor discussion groups organized and moderated by members of the council's Student Life Committee. These were followed by informal dinners at five Greek and affinity houses and a residence hall. Councilors were free to attend two class periods Friday morning, and their campus engagement continued right up to the last hour on Saturday: In several panel presentations, Dartmouth's ongoing Hurricane Katrina service trips were described by Tucker Foundation students and Dean Reverend Stuart Lord; the management of several student newspapers was discussed by their editors; and an update on freshman trips was given by students in the Dartmouth Outing Club and Andrew Harvard '71, director of Outdoor Programs.

The discussion group on membership in Dartmouth's diverse community attracted more than 30 people and ran over the planned hour.

“I think there are more international students just in this room than were at Dartmouth when I was a student,” councilor Mike Houlahan '61 said to warm laughter, and he invited everyone to "ask any question you'd like." Starting it off, he held up the latest issue of Dartmouth Alumni Magazine, with a cover story on Native Americans at Dartmouth, and asked the students to talk about several offensive incidents directed toward Native American students last fall.

As the discussion broadened to other minority students' experiences, Kelvin Quezada '09 described "the constant pressure we feel to prove ourselves. For example, maybe being premed instead of studying social work, even though we may love social work. It'd help if the administration understood this and said, ‘You don't have to prove yourself to anyone.'”

"This conversation we're having is awesome," said Ray Rodriguez '09, president of the Gay-Straight Alliance. "It's the kind of talking students do. But there needs to be more than talking."

Sam Kohn '09, acting president of Native Americans at Dartmouth, agreed. “Students are aware of the support
networks,” he said, “but not a lot of actual change in the infrastructure has happened.” He favors the administration's taking steps to implement educational programs, such as a program that would have students on both sides of an offensive incident meet for a one-on-one conversation that he believes would lead to better understanding. 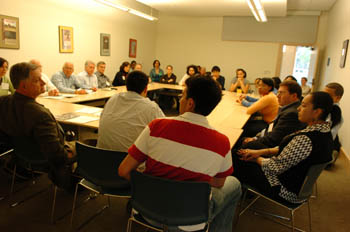 In grappling with these issues, said councilor Wade Herring '80, Classes of 1979–1980 representative, “Dartmouth is a better college than it was before.

"I want students to know that alumni are not a monolithic body," he said. "Those of us who come to Hanover, on our own time and own dime, to serve in the council and other alumni organizations, come because we care about Dartmouth today.”

“We make it a point to go back to other alumni and say, ‘here's what's happening on campus,'" said councilor Janine Fate Avner '80, general at-large representative, who is also a member of the Native American Alumni Association of Dartmouth and the Executive Committee of the Dartmouth Club of Los Angeles. "We should be, can be, and want to be charged with working for change.”

Other discussion groups focused on students' day-to-day life in the dorms and Greek houses; on how students balance the demands of their academic, civic, and social lives; and student leadership.

“The Alumni Council is entrusted to learn and know what Dartmouth is about. There is no organization in a better place to do that," said former councilor Andy Horne '87, a member of the council's College Relations Group, during Saturday's plenary. "I went to a student leadership discussion, I had dinner with students, and I went to two classes. All before I even got to a plenary session.”

Learning and Knowing the Alumni Council

Councilors' communication with the broader alumni body had taken off since the December meeting at which President Beattie had made this a top priority, reported councilor John Reed '75, '79Tu, chair of the Communications Committee. He attributed this to the rollout of an email toolkit that forty councilors had made use of just since the last meeting. 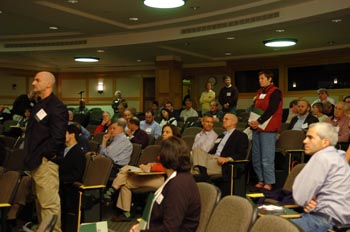 It was the biggest communications drive in the history of the council, he said, and he urged every councilor to take advantage of the toolkit. Discussions also addressed how at-large reps can identify underrepresented alumni and how to interest the large majority of alumni who aren't aware of the Alumni Council or what's happening on campus.

Councilor Jeff Weiss '86, Classes of 1985–1986 representative and chair of the Mission Working Group, presented for vote a draft mission statement and core values the group had produced after getting input from councilors in more than fifty emails since December. The statement identifies the mission of the Alumni Council as follows:

“to sustain a fully informed, representative, and engaged exchange of information and sentiment between alumni and their College, and to enhance and inspire alumni involvement that furthers the mission of the College.”

In the discussion that preceded the vote, former councilor Fred Stephens '53 asked what the group understands the mission of the College to be, and Weiss responded that the council's understanding is in line with the new College mission statement issued by President James Wright's office this spring. The council draft mission statement was approved with one dissenting vote (the statement and core values are available on the Alumni Council Web site).

President Beattie then announced the formation of the Ad Hoc Committee on Council Structure, and invited any current councilor to join who can commit to the extensive work required to examine the council structure and recommend changes for improved function. President-elect Rick Silverman '81 said the goal was to have any resulting proposals for consitutional amendments presented for vote at the December 2007 meeting.

The council voted J. B. Daukas '84 as president-elect; it elected Susan Luria '89 and Dennis Ryan '81 to the Nominating Committee and Fate Avner '80 to the College Relations Group.

The defeat of the trustee candidates put forth by the Nominating Committee elicited energetic discussion during chair Rick Routhier's report on the trustee election process as well as at other times during the council weekend.

“Given the rules [which mandate the nomination of three trustee candidates by the council for one vacant alumni trustee seat on the board] and now the demands of money and time spent in open campaigning, we believe we will not be able to get the best candidates to run for positions on the board of trustees," Routhier said.

Councilors weighed in with a variety of suggestions, and many expressed frustration at not being able to get alumni who've supported petition candidates in recent elections to come to the table. Councilor Sarah Hoit '88 asked Routhier what he thought a solution would be.

"We worked on it for four years. It was the alumni constitution," he said.

“The trustee election process is a problem, and an urgent one,” Routhier said. "I would ask the trustees to take a careful look at the process of how they choose their board."

Fielding numerous questions about the election process in their panel discussion, trustees Jose Fernandez '77, Al Mulley Jr., MD, '70, and chair Bill Neukom '64 referred to the work of a governance committee on the board of trustees that has for the last year been studying what sort of board best serves Dartmouth's interests in the 21st century, and how that board should be elected. The trustees said they anticipated a report from the committee at their June meeting.