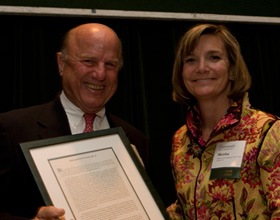 Bill, although as a boy you heard about Dartmouth continuously from your father, William Haven King '33, your first glimpse came your freshman fall after a long train ride from your home state of Virginia to White River Junction,Vermont. You still recall the excitement of your first view of "that spiral," Baker Tower, as you approached Hanover.

It did not take long for you to become the virtual "mayor" on campus. You may have inherited your green blood from your father, but your mother, a national figure-skating champion and Olympian, passed along her athleticism. Your athletic accomplishments at Dartmouth are nothing short of spectacular, including captaining the first undefeated football team in 27 years! In addition, you were an All-East quarterback and named to the All-Ivy Team, All-Ivy Scholastic Team, and All-American Third Team. A high school baseball player, you decided to change sports and give lacrosse a try under Coach Tommy Dent, captaining that team as well, while being selected All-American First Team your senior year.

In 1963 the Dartmouth Alumni Magazine noted that the senior award ceremonies seemed like "Bill King Day," with your receipt of the Barrett Cup as the outstanding senior, the Watson Trophy as the Athlete of the Year in all sports, and the Dartmouth Cup as the athlete who reflected the most credit on the College.

Although you have commented that your football experience under Coach Blackman impacted your life by providing you with the opportunity to be a part of a team with a "collective spirit," you are also quick to point out that sports were incidental to the rest of your Dartmouth experience. Enjoying the camaraderie of your close-knit class, you participated in the Green Key Society, Dartmouth Outing Club, and Theta Delta Chi fraternity, and you served as president of Casque and Gauntlet senior society. In the classroom, you developed a lifelong love of history, in which you ultimately majored.

Following graduation, you enjoyed a year teaching world history at Athens College in Greece before attending the University of Virginia Law School, where you served as president of your class. After earning your law degree, you joined the law firm of McGuireWoods, where you are now in your fortieth year and have served as vice chairman and partner. Recognized as a leader in your field, you are a fellow of the American College of Trial Lawyers and the American Bar Foundation, and are recognized in Best Lawyers in America, Super Lawyers, Chambers' Guide to Leading Lawyers, and Lawdragon's Leading Lawyers.

Bill, your love for Dartmouth is obvious to all and is reflected in a long list of activities. You have served the Dartmouth Club of Virginia, the Alumni Council, your class reunion giving committees, and major College policy and fundraising committees. Elected to the Board of Trustees in 1991, you served for ten years, ultimately chairing the board. Most recently, you chaired the Presidential Search committee that recommended the appointment of James Wright.

A true Virginia native, you have been no less active in your community there, showing a true passion for civic issues. Your local board service includes the Sons of the Revolution, Richmond Home for Boys, John Marshall Foundation, YMCA of Greater Richmond, St. Christopher's School Alumni Association, Virginia League for Planned Parenthood, Central Virginia Chapter of the American Red Cross, and the Natural Gas Company of Virginia, Inc. You have also been the president of the Richmond Assembly.

While you were on the Dartmouth Board of Trustees, a presentation by the College arborist sparked your interest and has resulted in a hobby that you have pursued on your land in Virginia. You and your wife, Grace, have lovingly planted a gorgeous arboretum surrounding your home. Many of your happiest hours are spent there surrounded by children, step-children, in-laws and grandchildren. Due to this passion, you have become involved with the local Lewis Ginter Botanical Garden, volunteering as a director and first vice president.

Bill King, grower of all things green, we are so fortunate that you traveled north forty-eight years ago to join the Dartmouth family. In appreciation of the extraordinary contributions that you have made to your alma mater, your community, and society, we are proud to honor you tonight with the Dartmouth Alumni Award.