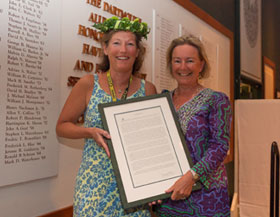 Is there anybody who consistently has more fun in her life than Ann Duffy '77? We do not think so! A perpetual ball of energy, you are the ultimate multitasker with a mischievous side that we all enjoy.

Raised in a family of six children, you acquired your social skills at a young age. Your father brought his clan to the Upper Valley during the summer of 1961 when his employer sent him to a summer executive program at the College. The entire family enjoyed the Upper Valley, and Lake Morey became your annual summer vacation destination. Lucky for us, you also fell in love with Dartmouth and subsequently became a member of one of the first four-year coeducational classes. You jokingly thank the captain of your high school cheerleading squad for your admission acceptance as you only had a group shot of your squad as your source of college application photos. Your own photo was submitted to Princeton and the headshot of your captain was the only one left to send with your Dartmouth application. Luckily, nobody noticed that your looks had changed slightly when you arrived on campus.

As you did with everything, you immersed yourself in campus life both in and out of the classroom. Hoping to major in Japanese, you were disappointed when you realized that department did not exist. You quickly adapted to the situation by majoring in Chinese and English. Fueled by a passion for learning, you still rave about Professor Pease's "English 5" class and the times you spent listening to Bill Cook read poetry. Along the way, you thrived in the Asian Studies department, received two academic citations in History and Chinese, discovered a fabulous mentor in Professor John Major, and ultimately graduated cum laude with distinction in Asian Studies. You also found time to play field hockey and lacrosse during your freshman year; manage the men's freshman lacrosse team your sophomore year; write articles and sell ads for The Dartmouth; and co-found both the Women's Hockey Team and G.N.O., a secret society of women. Of course, you are quick to note that one of your proudest moments was being selected to serve as "head wench" at the Heorot Medieval Banquet.

Following graduation and a stint in advertising, it was off to Stanford University for an MBA. An extraordinary career in marketing and communications has followed with positions at Time Magazine, The New York Times, Conde Nast Publications and Sports Illustrated, where you were Director of Finance and the founder, vice-president, and general manager of Sports Illustrated for Women. Currently, you hold the position of CFO for Bloomberg Publishing which includes Bloomberg Businessweek and Bloomberg Markets magazines.

As busy as you were, you still made time to volunteer for your alma mater in a multitude of roles. Supporting the great Class of 1977, you have served as the newsletter editor, vice president, leadership agent and member of the 15th, 20th, 25th (which you co-chaired), 30th, and 35th reunion committees. You have also participated on the Alumni Council serving as a member of the Executive Committee, the College Relations Group and as chair of the Athletics Committee. Selected to represent the Alumni Council on the Dartmouth Alumni Magazine's Editorial Board, you were then elected chair. In addition, you have supported the enrollment effort as an interviewer and enrollment coordinator for the Wilton, CT vicinity.

Of course, like your parents did many years ago, you have produced your own clan with your husband, Nick Hanna. Much of your civic involvement has related to the activities of your three children: Daisy, Nick and Teddy. Coaching soccer, softball, field hockey and lacrosse have filled many hours, as has serving on the Board of Governors for the Annisquam Yacht Club and the Board of Trustees of the Wilton Library. A quote you shared in one of your class newsletters says it all, "I play/coach a lot of organized and disorganized sports with my husband and 3 kids... I would call it a second childhood, but as friends point out, I never really abandoned the first one...."

Ralph Waldo Emerson once said, "The world belongs to the energetic." That being said, Ann, you must own a major portion of our planet. In recognition of the time and energy you have expended on behalf of your alma mater, family and community, we are so very proud to honor you with the Dartmouth Alumni Award.