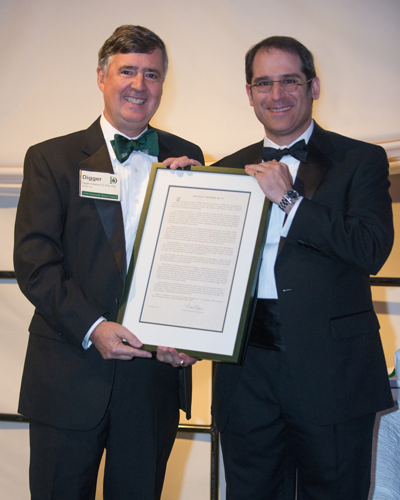 The grandson of Joseph J. Donahue 1908 and son of Douglas A. Donahue '45, you gleaned from a tender age that Dartmouth was special. On a visit to Dartmouth as a teenager, you were given a Dartmouth jacket that you proudly wore every day to school. After graduation from Phillips Academy in Andover, Massachusetts, you headed for the Hanover Plain.

Your boundless energy led you to become involved in myriad activities. You were a member of the varsity squash team all four years, captaining the team your senior year. You founded Fayerweather Refrigerator Associates, a refrigerator rental business, which did a brisk business from your delighted classmates. You joined Psi Upsilon fraternity, and eventually were tapped by your peers to lead as president. You were a member of Dragon senior society, and served on the Interfraternity Council. The Dartmouth benefited from your sales skills as advertising manager. Fascinating courses with Professors Morton, Daniell, and Wright helped you decide to major in history.

Academics were paramount for you, but in tandem with community involvement. You've drawn on those student leadership positions in your career and your personal life. You're grateful for the role models you met on campus--men who played a key role in your education and in your development as a young man. Coach John F. Kenfield, a true gentleman in your eyes, provided not only thoughtful coaching but also an influential perspective on sportsmanship. Bob Kaiser '39, house advisor for Psi U, demonstrated a deep devotion to guiding the brothers and strengthening the house. Procter John O' Connor, head of campus police, was considered a father figure by many students who admired his gracious manners and sage advice.

Following graduation, you earned an MBA from the Harvard Business School in 1976, then headed to Brown Brothers Harriman & Co. Initially employed in corporate banking, you've led the firm's global securities business for much of your career. In 1997, you were named partner in charge of the Boston office, and in 2008 you were appointed managing partner. You certainly are a frequent flyer, traveling to BBH's 17 locations around the world, often organizing a squash match or two along the way.

Your involvement and support of your community is generous and wide-ranging. Committed to many Boston-based organizations, you are a past trustee of the American Textile History Museum and the Financial Accounting Foundation. You were recently recognized with the Leadership Excellence Award by the United Way of Massachusetts Bay and Merrimack Valley.

When it comes to Dartmouth, your dedication is inspiring. An alumni interviewer for more than twenty years and district enrollment director for ten, you've supported and strengthened what makes Dartmouth distinctive, and contributed to the continuity of this great institution. You have enjoyed interviewing prospective students, observing their Dartmouth experience when they are admitted, and offering guidance to help them launch their careers. Your other roles include serving on the President's Leadership Council and the Athletic Advisory Board, as a class agent, co-chair of reunion giving committees, and as a member of the Dartmouth College Fund Committee. Still a fiercely competitive squash player, you recently endowed the Digger Donahue '73 Head Coach of Men's and Women's Squash.

All this would not be possible without the enthusiastic support of your wife, Susan, who first shared your adventures at Dartmouth while visiting from Skidmore; and your children Aidan '04, Abby '06, and Peter. A favorite family memory is knocking on the door of a newly admitted student to present them with a Dartmouth T-shirt. What a wonderful surprise to open the door to find three generations of Dartmouth--your father, you, and your daughter--welcoming that student to the Big Green.

Digger, in recognition of your loyal and steadfast contributions to your community, career, and alma mater, we proudly present you with the Dartmouth Alumni Award.