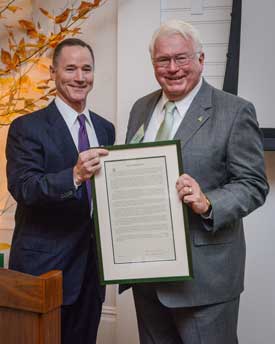 During your senior year at John Dickinson High School, Dartmouth football coach Bob Blackman learned about you from his extensive network of alumni and coaches. Though you knew nothing about Dartmouth, you had recently read an article in Life magazine that an "athlete with brains would love this place." Your decision to attend Dartmouth was enthusiastically supported by the Dartmouth Club of Delaware.

You threw yourself into campus life. An economics major, you relished the intellectual challenge of other courses such as philosophy and comparative literature. You made your mark at Dartmouth on the athletic field, being a part of the undefeated, nationally ranked, Ivy League championship football team. You joined Beta Theta Pi and later the Sphinx senior society, both allegiances you treasure today. A true leader, you joined the Green Key Society, Palaeopitus, and the Interdormitory Council. As president of your sophomore, junior, and senior classes, you were selected to accompany poet Robert Frost for four days on his last visit to campus, a magical memory. The culmination of these experiences was your opportunity to lead your class into graduation as class marshal.

Following graduation, you returned to Delaware to work in various capacities for E.I. DuPont. Your career then took a different track, as you joined the U.S. Department of Commerce Foreign Commercial Service, where you served as minister, counselor, and deputy assistant secretary. As a foreign service officer, you traveled the globe and lived all over the world, in such locales as Korea, Paris, and Stockholm. The confidence in public speaking you honed at Dartmouth would serve your career well. You were awarded the U.S. Department of Commerce Silver Medal and Gold Medal.

Your civic commitments are impressive as well.Upon retirement from the foreign service, you tackled the logistical challenges of a running the beachfront town of Fenwick Island, Delaware, as council president and mayor. You served as vice president of the American Foreign Service Association, community volunteer on many chambers of commerce, and on four Lutheran church councils.

You have worked tirelessly on behalf of Dartmouth. The list of your roles is long and varied: enrollment interviewer, class agent, president of clubs in Delaware and North Carolina, and president and reunion co-chair of the great Class of 1965. You represented the '65s on the Alumni Council, where you joined the Communications Committee, the Executive Committee, and the Nominating and Alumni Trustee Search Committee, eventually becoming chair. On a personal level, you have encouraged fellow alumni to become more involved and urged increased voting participation in alumni trustee elections.

You've felt great satisfaction from your work with your fraternity and senior society, both organizations that were important to you as an undergraduate. You helped negotiate the return of Beta to campus after a 10-year absence, and worked with other alumni to improve the house on many levels. You were part of a group that conducted a capital campaign for the Sphinx, putting the organization on a stronger financial footing and renewing bonds among your brothers.

Of course, the wholehearted support of the Frederick clan has helped make this possible. Your energetic wife, Marcia, a former Mount Holyoke student you met on a blind date sophomore year, is for all intents and purposes a Dartmouth grad. You're blessed with four children, Jennifer '92, Holly, John, and Chris, along with eight grandchildren. One of your favorite times is when your family gathers at Fenwick Island for a summer beach week.

You once quoted President Dickey, saying, "Only out of commitment is any man fulfilled with his fellows, whether in the embrace of fellowship or the loneliness of leadership." Pete, in recognition of all you have contributed to your community, career, family, and alma mater, we proudly present you with the Dartmouth Alumni Award.