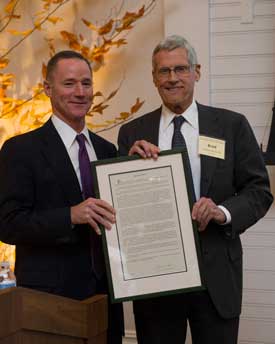 Distinguished naval officer, worldwide financial expert, and Dartmouth trustee -- Brad Evans '64 has many titles and we are so very proud of each and every one of them.

You decided you wanted to attend a rural college and, after traveling north from Carlisle, MA, to Hanover, NH, you said, "Like so many other people have experienced, I fell in love with the campus the moment I saw it."

Majoring in sociology, outside the classroom you competed on the freshman basketball team and participated in Phi Delta Alpha fraternity and the Dragon Senior Society.

Upon graduation, you were commissioned as an officer in the U.S. Navy, where you served as a reconnaissance attack navigator with deployments to Southeast Asia. As a result of your exemplary service as a naval flight officer, you received the Distinguished Flying Cross, the Naval Commendation Medal, and numerous Air Medals. Your next stop was the Columbia Business School, where you received your MBA in 1970 before joining Morgan Stanley. During the next 40 years, your career progressed rapidly with this worldwide leader in investment banking. Based in New York City and London, you have held such positions as vice president, managing director, co-head of the mergers and acquisitions department, head of the firm's European investment banking business, and, currently, senior advisor of mergers and acquisitions.

Crediting Dartmouth with playing a very meaningful role in your development and education, you have spent an extraordinary amount of time and energy giving back to your alma mater. A member of the great Class of 1964, you have supported your class by serving as a class agent, 25th reunion giving committee member, co-chair of the 40th and 45th reunion giving committees, and, currently, as the co-chair of your 50th reunion giving committee. You have also served on the major gifts committee of the "Will to Excel" capital campaign, were a fraternity coordinator, co-chaired the "Campaign for the Dartmouth Experience," and currently serve as a Dartmouth College Fund committee member and as chair of the President's Leadership Council. In addition to all of this, you served on the board of trustees from 2003 through 2012. During that time, you collaborated with Steve Mandel '78 and your other fellow trustees to attend as many alumni events as possible to facilitate communications between alumni and the board. One of your roles was to serve as chair of the board of trustees' Alumni Relations Committee, which worked closely with the Alumni Council's Alumni Liaison Committee to gather alumni sentiment.

As the saying goes, "If you want to get something done, ask a busy person to do it." Rounding out this impressive resume is your very extensive civic volunteerism record. You have also supported your graduate school alma mater as a member of the board of overseers of the Columbia Business School. In addition, you serve as a trustee of the Wakeman Boys and Girls Club in Fairfield, CT; on the board of overseers of Horizons at Sacred Heart University; and as a trustee of Catholic Academies of Bridgeport, CT.

Obviously, there is a lot of work, but you still seem to find time to play. Many lifetime friendships were formed with your Phi Delta Alpha brothers and a group of you has taken numerous trips together over the years to fabulous locations including Scotland and Ireland. In fact, you just returned from one of these gatherings in Napa, CA, so that you could join us for this event tonight. This is an example of the passion you have for the Dartmouth network. As you have noted, a connection is instantaneous when you meet a fellow alumnus because of your "shared common experience of four years in Hanover."

However, there is one priority that ranks much higher than Dartmouth or anything else for you, and that is your family. You and Barbara were married in 1970 and have enjoyed 43 years together raising your three sons, Peter '96, Timothy '99, and Matthew (Amherst '99). The four loving grandchildren they have produced are the icing on the cake for the two of you!

Brad, you are truly one in a million, for, as Henry David Thoreau wrote, "When were the good and the brave ever in the majority?"

In recognition of your dedication to your alma mater, career, country, and family, we are extraordinarily proud to present you with the Dartmouth Alumni Award.