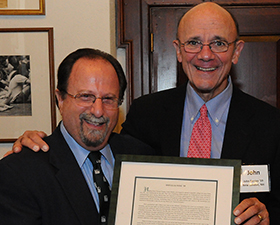 Hailing from Nassau County, Long Island, you longed to attend a topnotch college far away from any city, and Dartmouth fit the bill. This was a befitting match indeed, as evidenced by your cherished undergraduate years during which time you majored in history, participated on the cheer team, served as treasurer of Tau Epsilon Phi fraternity and even sold popcorn at the Nugget Theater--allowing you four years of complimentary movie viewing. Attributing many of your life achievements and values to the knowledge you acquired at Dartmouth, it was, as you say, where you "learned to learn."

After graduation and a three-year stint in the military, including two years as a company clerk in Germany, you set your sights on Madison Avenue. A training program at the advertising firm McCann Erickson confirmed this ambition, and you subsequently obtained an MBA with an emphasis in Marketing from Columbia University. What followed was the start of a successful career in the field, including thirty years at various subsidiaries of major advertising conglomerate The Interpublic Group of Companies; bringing you to New York, Atlanta, Tokyo and Houston. In 1993, your years of expertise lead to the founding of The Wise Associates, a marketing consulting firm that serves businesses and organizations large and small--including clientele right here in the Upper Valley--where you currently remain president.

When it comes to your alma mater, it is no secret that Dartmouth is near and dear to you: near in the sense that you reside locally in Grantham, NH; dear in the sense that you have demonstrated an extraordinary history of service to the College. You have served in a variety of roles for the Dartmouth College Fund; have been an alumni career advisor; and were among the founding group of classmates who created Dartmouth Partners in Community Service, for which you chair the alumni board. For the great Class of 1959 you have been indispensable, serving as vice president, secretary, webmaster, class agent and chair of your 35th, 40th, 45th, and 50th reunions.

No less involved with your community, your repertoire includes trustee of the Upper Valley Land Trust; president of the Norwich Racquet Club; eight years on the Board of the Hanover Area Chamber of Commerce including three years as chair; and chair of the Board of Governors of Leadership Upper Valley, an organization that prepares leaders to better serve their communities.

Throughout these endeavors, you have had the full support of your wife of thirty-six years, Joanne. You and Joanne regularly serve as a host family for international Dartmouth students, and you also share a love of the arts. In fact, inspired by your time in Japan, you two founded The Wise Collection, representing contemporary Japanese and American artists, of which Joanne has been the director for thirty years.

Pablo Picasso once said, "Action is the foundational key to all success." Doug, you have successfully dedicated yourself to your career, community, family and alma mater; and it is in recognition of these actions that we are honored to present you with the Dartmouth Alumni Award.