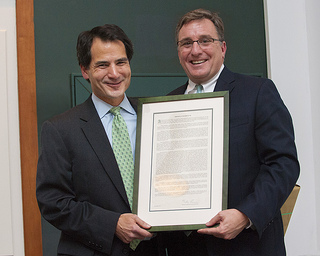 Thomas T. Daniels '82 (left) was presented the
Dartmouth Alumni Award by Marty Lempres '84,
president of the Alumni Council, at the 205th
Alumni Council meeting on November 2, 2012.

As the son of an Army surgeon, you acquired a global perspective and a love of travel at an early age. You had already lived in Hawaii, Texas, Washington, Ohio, and Alaska by the time you landed in the Washington, DC, area for your high school years. With a father at the Pentagon and a mother on Capitol Hill, it is not surprising that you were drawn to politics and the Capitol Page School, which you attended your senior year.

While attending a summer high school debate camp in New England, you visited the Dartmouth campus and decided to apply early decision, drawn by the myriad of study abroad programs, fabulous skiing, and accomplished Dartmouth Forensics Union. You have noted that it was the passion of the alumni you had met that sealed the deal for you. It was, as you said, "not just a destination, but the beginning of a journey."

Majoring in Asian Studies, you took full advantage of the opportunities Dartmouth had to offer both inside and outside the classroom. Participating in Language Study Abroad, Foreign Study, and Tucker Foundation internships, you spent a term studying French in Bourges, France; worked for the Intergovernmental Committee for Migration in Singapore and Indonesia, where you aided in the resettlement of Vietnamese refugees; and attended the Beijing Normal University in China. Somehow, during those terms that you were on campus, you found time to lead freshmen trip bike tours, play on the men's rugby team, usher at the Hopkins Center, lead campus tours, debate for the Forensic Union, photograph for the Aegis, and participate in the Green Key Society, the Committee on Student Organizations, Bones Gate fraternity, the Ski Patrol, and the Asian-American Association. Someday you might share with us how you were able to clone yourself during those college years!

Following graduation, it was off to Chicago, where you accepted a position with the American National Bank and Trust Co. A spectacular 22-year career in banking followed, which included additional positions at J.P. Morgan Chase Bank and Banc One Capital Markets. Still making sure you took advantage of the full 24 hours of each day in every way possible, during this period you also attended the University of Chicago Booth School of Business at night to earn your MBA in finance. While at Banc One, you began working on the recruitment effort that led to your being recruited yourself by Spencer Stuart. As a New York-based partner and senior director, you are a member of the firm's financial officer, financial services, private equity, board, and diversity practices. In addition, you serve on their global client committee and the audit and risk oversight committee.

From the moment you graduated, Dartmouth has remained a priority in your life as your extraordinary record of volunteerism reflects. The breadth and depth of your work are astounding, as you have supported class, club, enrollment, fund-raising and governance efforts for more than 30 years. Roles you have filled include serving your class as president, reunion treasurer, class agent, and participation chair. In addition you have served as a co-district enrollment director in northern New Jersey and currently interview perspective students in New York City. Tonight we must also extend our sincere gratitude to your fellow alumnus and business colleague, Rick Routhier '73 '76Tu, who approached you in 2006 about joining the Alumni Council. Lucky for us, you agreed. Rick, himself, had already made a huge impact on the College's governance structure as president of the Alumni Council and chair of the Nominating and Alumni Trustee Search Committee. He passed the torch to you at a crucial point in Dartmouth's history and you were up for the task. On the Alumni Council, you served on the Enrollment and Admissions Committee, the Executive Committee, and as chair of the Honorary Degrees Committee. In 2009, you were elected to chair the Nominating Committee during the first two trustee elections under the new election guidelines that resulted from constitutional amendments approved by alumni the prior year. Under your leadership, the 2010 election produced the highest trustee election participation rate in history, with 32 percent of alumni voting in an election that resulted in the addition of Mort Kondracke '60 and John Replogle '88 to the Board of Trustees. The following year, Gail Koziara Boudreaux '82 and Bill Burgess '81 were also elected. A member of the committee for one more year as the past chair, you also participated in the nomination of Ben Wilson '73, Rick Kimball '78 and Nate Fick '99, who were ultimately elected. You continue to remain involved in the process as the current chair of the Committee on Trustees. This evening, we also extend our gratitude to Mr. and Mrs. Daniels for allowing young Tom to participate in the House Page Program in Washington all those years ago, which must have planted the seed for this future Dartmouth governance wizard.

Your civic and board involvement have been just as impressive, as you have served as vice chair of the Americas Council; treasurer and member of the board of directors of the Association of Executive Search Consultants; member of the nominating, entertainment, and membership development committees of the Montclair Golf Club; chair of the admissions committee at the University Club of Chicago; and as a member of the junior board of the Lawrence Hall School for Boys.

It seems appropriate that one of your passions is running, for how else could you keep up this pace? In fact, one of your favorite races each year brings you back to New Hampshire for the Reach the Beach Relay, where you participate on a team that races more than 200 miles in a 24-hour period from Cannon Mountain to Hampton Beach.

Of course, none of this would be possible without the support and understanding of your family. A fortuitous stroke of luck caused you to ride on the 156 Bus in Chicago during your early days there. It was on this bus that you met the love of your life from Southside Chicago, Donna Ross. She has been your best friend and a true partner on this journey of yours. The two of you are the very proud parents of Lauren and Tyler.

As the saying goes, "If you want to get something done, ask a busy person." We think it is fairly obvious why we keep asking you, Tom, for your guidance and leadership. In recognition of your lifelong devotion to your community, your family, your profession, and your alma mater, it is our honor to present you with the Dartmouth Alumni Award.