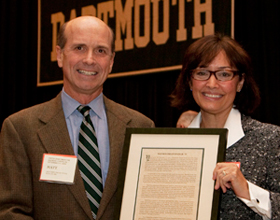 Your uncle, Vin Turecamo '37, also a Dartmouth Alumni Award recipient, began recruiting you and your cousins for Dartmouth at a young age as he led your family caravan north to Hanover for football games and many fabulous days of skiing! Drawn to Dartmouth's sense of community, you matriculated with the Class of 1975 following an outstanding career as a three sport athlete participating in football, hockey and lacrosse at the Canterbury School. A perseverant initiative and keen organizational skills were apparent even in high school as you convinced the headmaster to start a lacrosse program. It is very obvious that there lies your passion. Recently commenting on this, you stated, "I think I was hooked as soon as I picked up a wood stick when I was very young."

At Dartmouth you thrived both inside and outside the classroom. Majoring in art, you spent many hours in the studio workshops, yet still found time to take courses in nineteen of the thirty academic departments, enjoying as much variety as possible and earning a citation in physics from Professor Huggins along the way. Competing as an attack on the lacrosse team, you led the team in scoring your senior year. Off the field, you enjoyed spending time at the Aquinas House and appreciated the encouragement provided by Father Bill Nolan.

Following graduation a very successful career in commercial real estate was launched with Spaulding and Slye which was later bought by Jones Lang LaSalle. Holding positions as principal, managing director, international director and board member, your reputation grew quickly in this competitive field. Recognized among your peers, you have served as the president of the Massachusetts chapter of the National Association of Industrial and Office Parks, as well as a member of their national board, and as president of the Greater Boston's Real Estate Board's Commercial Leasing Committee. After 30 years with your original employer, you recently left to form your own company, Still North Partners.

Attributing so much of your success and leadership ability to participation on sports teams, particularly lacrosse, much of your life has been committed to providing this same opportunity for children throughout New England. You started the Weston/Wayland Youth Lacrosse program; co-founded the 500-plus team Massachusetts Bay Youth Lacrosse league; helped start the Weston High School boys lacrosse team; and joined the board of MetroLacrosse, a program for urban youth. To top it all off, you recruited some of your fellow Dartmouth lacrosse alumni to join you in the purchase of the rights to operate the Boston Cannons, a founding member of Major League Lacrosse. As the Boston Globe has noted, Matt Dwyer is truly Boston's "pied piper of lacrosse."

Your volunteerism on behalf of local youth extends beyond the lacrosse field as you have also served as a member of the board of directors of the Youth Ministry Commission of St. Julia Parish; Nantucket Community Sailing which offers free sailing to local youth; and the Life Is Good Kids Foundation which provides "play" therapy for children who have been traumatized.

Now, it's difficult to believe that you would have time for any more commitments, but you have never forgotten your alma mater. Since graduation you have conducted alumni interviews; served on the Alumni Council; raised funds as a Special Gifts volunteer in the "Will to Excel" campaign; participated on the Friends of Men's Lacrosse Board and the 2009 search committee for the head men's lacrosse coach; and supported your class as president, class agent, reunion giving committee member and as a member of every reunion committee.

All who know you realize that, although you love lacrosse, your world actually revolves around four very important people. In 1971 you met your wife Meg and, since she was a student at the University of New Hampshire, the two of you logged many miles travelling Interstate 89 between 1971 and 1975. In your 25th reunion book you commented that she is your "best friend and partner for life." The two of you are the very proud parents of Cate, Molly and Jake '03. The apple did not fall far from the tree as Jake wore the same number 8 as his father for the Dartmouth Men's Lacrosse Team.

Franklin Delano Roosevelt once said, "We cannot always build the future for our youth, but we can build our youth for the future." In recognition of the extraordinary impact you have had on the lives of thousands of young people; your achievement in career; and your dedication to your alma mater; it is our honor to present you with the Dartmouth Alumni Award.