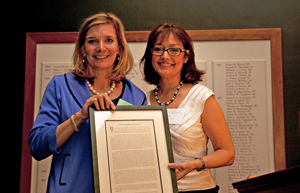 You vividly recall the day your father, Spencer Johnson '45 '48Tu, refused to take you to his Dartmouth reunion because you were too young. Feeling very mature at the age of five, you responded, "Someday I'm going to go to Dartmouth without YOU." The youngest of three daughters, you were his last hope for a legacy admission and you celebrated together upon your matriculation into Dartmouth's first four-year class to include women.

An accomplished swimmer, you had never considered participating in a sport above the water. However, living in French Hall, you decided that you would take advantage of your proximity to the river and row crew. Your father had skated for the legendary hockey coach Eddie Jeremiah and you were fortunate to row for another incredible Dartmouth mentor, Peter Gardner. And could you ever row! High points in your NCAA career included participation in both the 1975 National Team Rowing Camp and the 1976 Olympic Rowing Camp. Off the river, you served as the first woman patrol leader on the Dartmouth Ski Patrol and participated on the Interdormitory Council. Just as accomplished in the classroom, you received a National Science Foundation Research Grant and graduated magna cum laude with distinction in your mathematics major.

Summarizing your Dartmouth experience in the Will to Excel Campaign brochure, you stated, "I realized the sport itself and all the lessons learned in competing successfully were personally as significant as my Dartmouth diploma."

How appropriate that a lifetime career of teaching and coaching would follow. Although accepted to law schools at Duke, the University of Virginia, and Cornell, you preferred to pursue your passions as a faculty member and coach at Phillips Academy in Andover, MA. Since that time your resume has included teaching and coaching positions in both the United States and Canada; serving as the Junior National Crew Head Coach for Girls taking the teams to the World Championships in France and Sweden; the coaching of a New England Interscholastic Rowing Association eight with an undefeated season and three National High School Championship teams; the founding of the Hanover High School's Boy's Crew Team which you then coached; and the creation of Martha's Moms Rowing Club. This last club was a women's masters crew team that formed as a result of a school auction after you donated an opportunity for women to row in an eight-person shell. The mothers who bought it had so much fun they begged you to form a team for them. Once again, your success continued as "Martha's Moms" competed in many national championships, the Head of the Charles, and the World Championship, winning many gold medals along the way.

As incredibly busy as you are, somehow you have always made time for the Big Green. Supporting the Class of 1976, you have served as a class agent; mini-reunion chair; leadership agent; and member of your executive, reunion and reunion giving committees. As a member of the Alumni Council, you served on numerous committees including Honorary Degrees, Athletics, Executive, and the Nominating and Alumni Trustee Search Committee. Elected president of the Alumni Council, you led the successful effort to amend the Alumni Council constitution expanding representation and revising the committee structure. The following year you served as the first chair of the newly formed Alumni Liaison Committee. We are forever grateful to the service you provided us last year as a member of the Presidential Search Committee which brought Jim Yong Kim to us!

Your civic involvement has been just as hectic with roles as the regional representative for the United States Rowing Association; director of the George Pocock Rowing Foundation; board member of the Northwest Children's Fund; chairman of the auction boards for the Cedars Cancer Institute and the Gilda's Club Montreal charity; and vice president of the Dresden Rowing Club.

Now one would wonder if you could have any type of personal life with such a schedule. As hard as it is to believe, you found a soul mate with a schedule as busy as yours. In fact, rumor has it that your husband, Jim Beattie '76, was given permission to leave his New York Yankees game (where, luckily, he was not pitching that night) early to travel to Syracuse so that he could attend your rehearsal dinner and wedding. He then returned to his major league baseball team while you returned to teaching in Andover and you were able to spend a total of two days together during your first five weeks of marriage. No worries, you have commented that Jim comes with a "no-trade" clause. The two of you are the very proud parents of Sam, Nell and Sarah. In your 25th reunion book you said, "Being their mother is the most defining 'career' of my life."

In recognition of the extraordinary contributions you have made to society, your community, and your alma mater, we are so very proud to honor you this evening with the Dartmouth Alumni Award.