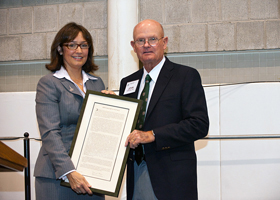 It was off to naval pilot school following graduation.  The United States Navy took full advantage of your electronic expertise stationing you as a naval aviator and electronics officer of an electronic countermeasures squadron in Japan.  This experience provided many opportunities for you to experiment with antennas and radio communications equipment, which would become a lifelong passion.  In 1960, you accepted an offer from Granger Associates, a producer of radio equipment.  Hired as a design engineer you were continuously promoted up to the position of vice president and general manager.  In 1968, you founded Technology for Communications International with two of your colleagues.  For the next thirty years, you served as president and CEO of this company which focuses on the design and supply of specialized radio systems for clients in 129 countries.  The company expanded in 1986 with the friendly acquisition of BR Communications.  Currently, you head Radio Propagation Services, Inc, which you co-founded in 1998.  This firm supplies real-time propagation information to specialized users of the radio spectrum on a world-wide basis.  One recent project you enjoyed involved renovating the radio system on the South Pole.

Throughout this extraordinary journey, you have never forgotten your alma mater.  On your Dartmouth College undergraduate application, you wrote, “In regard to college, it seems rather evident to me that the broader and better a fellow’s training, the broader and better will be his abilities in later life.  The responsibilities involved in such training rest partly upon the college and partly upon the individual.  Dartmouth, I am sure, could do more than hold up its end in such a bargain; I, if accepted, would do my best to uphold mine.”  Well, you have certainly gone way beyond the call of duty regarding your end of the bargain.  Serving on the Thayer Board of Overseers since 1989, you led the board for nine of those years from 1998-2007.  Under your chairmanship, the Thayer School’s extraordinary accomplishments included increases of 32% in the annual fund, 124% in faculty funded research, and 107% in the endowment.  It was also during this time that the building of the MacLean Engineering Sciences Center was completed.  Finally, a question you posed to Dean Hutchinson about what the Thayer School might need resulted in the creation of Angeli Parvi.  This program supports entrepreneurship through industry leaders who mentor aspiring entrepreneurs by guiding development of business plans and helps to secure funding.  Additional volunteer work at Thayer has included chairing the Dean’s Fund, and membership on the Campaign Executive Committee and the Development Committee.  In addition, you have supported the great Class of 1955 serving as a class agent, vice president, leadership agent and on the executive committee.  One of the most meaningful efforts you participated in pertained to Dartmouth’s swimming and diving team as you played a critical role working with the College in 2003 to sustain that program.  Once again you stepped in and coordinated the effort of alumni to create an endowment fund to support the team.  Thus was created the John C. Glover ’55 Fund named after your deceased former teammate and best friend.

All who know you realize that you are a true family man.  That will tend to happen when you have six children in eight years, as you and your wife, Sue did.  Married for fifty-three years, the two of you are partners in all that you do and are happiest when surrounded by your six children, son and daughters-in-law, and eight grandchildren.  We are so pleased that the Ballard dynasty continues at Dartmouth with two of your grandchildren receiving undergraduate and Thayer degrees.

British writer, William Hazlitt, stated “A strong passion for any object will ensure success, for the desire of the end will point out the means.”  In recognition of your many accomplishments and the passion you have expressed for your profession, family and alma mater, it is our honor to present you with the Dartmouth Alumni Award.