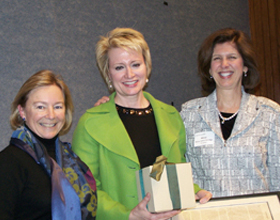 Susan, as a brilliant high school scholar, you had many college and university options available to you. A close relative who’d attended Yale, as well as friends who were there, urged you in that direction. Your guidance counselor was pushing Harvard.

You showed your unique pioneering spirit by deciding to become one of the first women to graduate from Dartmouth!

Pursuing a developing passion for writing and news, you accepted a position as a reporter with The Southampton Press/the Hampton Chronicle.  The seeds had been planted for an extraordinary career in journalism and media.  Positions at the Wall Street Transcript and Newsweek followed.  Deciding to catch your breath in 1986, you received a Nieman Fellowship at Harvard University where you spent a year studying health policy.  The year at Harvard was followed by a whirlwind of career achievements including serving as economics columnist for U.S. News & World Report and a U.S.-Japan Leadership Program Fellowship.  In 1998 you joined the NewsHour with Jim Lehrer, assuming the roles of health policy unit head and on-air correspondent.  Your work on television has included appearances as a regular analyst or commentator for ABC’s Nightline, CNN, and the McLaughlin Group.  You recently accepted the position of editor-in-chief of Health Affairs, while continuing to appear as an on-air analyst for the NewsHour.  You are a leader in your field, accumulating an extensive list of professional awards that includes the 2005 Award for Excellence in Health Care Journalism, a CINE Golden Eagle, the New York Festival award, and a first-place Gracie Allen award for public television news.

While juggling this hectic career you always found time to give back to your community.  You have served on the board and then as chair of the Global Health Council Board of Directors; as a member of the Council on Foreign Relations; and as a director of both the International Rescue Committee and the Japan Society of New York.  In addition you have been an active member of various Presbyterian churches over the years.

You have often mentioned that the four years you spent in Hanover were critically important to your development as a person.  With this in mind, you have expended an extraordinary amount of time and effort on behalf of your alma mater.  Your volunteer roles have included serving on the Alumni Council, Nominating and Alumni Trustee Search Committee, Public Affairs Advisory Committee, Tucker Foundation Board of Visitors, Dartmouth Medical School Board of Overseers, Reunion Giving Committee, chairing the Dartmouth Alumni Magazine editorial board, cochairing the Student Life Initiative, and serving as a trustee of the Dartmouth Hitchcock Medical Center.  Along the way you have been honored with the Dartmouth Presidential Medal and the Young Alumni Distinguished Service Award.  Not only were you one of the first women to attend Dartmouth, but in 1993 you were the first alumna to be nominated to the board of trustees in an alumni election.  Who could top that?  Well, you managed to do it in 2001 when you became the first alumna to chair the board of trustees.

It is difficult to imagine that you could have room for anything else, but all who know you realize that your world revolves around your family, which tops your priority list.  You did not spend all of your time studying after you accepted that Nieman Fellowship at Harvard.  A fellow student (and journalist), Chuck Alston, caught your eye.  The two of you were married in 1988 and have travelled this incredible journey together.  The proud parents of Willie, Sam, and Grace, it is a very active household that the five of you enjoy.

When you joined the Dartmouth College Board of Trustees, board chair John Rosenwald ’52, ’53Tu said, “On a scale of one to 10, she’s a 19.”  We could not have said it better.  You are off the charts in our eyes.  In appreciation of your devotion to Dartmouth, and in grateful recognition of your continuing loyalty and leadership, we are honored to present you with the Dartmouth Alumni Award.