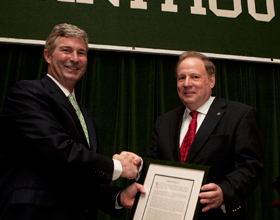 Sam Ostrow '67 (right) receives the Dartmouth Alumni Award from council president JB Daukas '84 (left) at a council dinner in Alumni Hall on May 15, 2009.

Your father, Herb Ostrow '35, '36Tu, was a thoughtful man who appeared to refrain from influencing your college selection. However, a quiet level of persuasion existed since birth, when he hung over your crib a Dartmouth banner that remained in your bedroom throughout your childhood. Perhaps the seeds for your future career in subtle public relations were planted at that time.

As a Dartmouth undergraduate you participated on the freshman track and baseball teams, served as social chair of Tau Epsilon Phi fraternity (where you were known as the band scheduling guru), and majored in religion. The fellowship of the Class of 1967 is well known, and you particularly enjoyed the lifelong friendships formed during that time.

Following graduation you returned to your hometown of Chicago to attend divinity school. The next few years were busy as you entered the field of public relations, attended law school, and entered politics to run campaigns for independent candidates. What better place to do this than Chicago? Graduating with distinction from John Marshall Law School, your public relations career skyrocketed as you worked as managing partner, president, and chief executive officer with major public relations consultancies, including serving as head of the public affairs, financial relations, and crisis management practices of two of the ten largest firms in the world. During this period you relocated to New York City and in 1994 you founded Ostrow & Partners, where you continue to handle issues in crisis management for large companies.

The bonds that were formed with classmates during your time in Hanover influenced you greatly. As a result, you have spent an extraordinary amount of time volunteering on behalf of your class, including serving as class and leadership agent, president, and member of both the reunion and the reunion giving committees. During your class presidency you were honored as Class President of the Year. Recognized for your leadership ability, you were president of the Class Presidents and the Class Officers Associations. In addition, you have been a member of the Dartmouth Alumni Magazine Editorial Board and the Dartmouth College Fund Committee; interviewed prospective Dartmouth students; served on the Alumni Council twice; and were an early member of Dartmouth Undying. In your 25th reunion book you commented on the camaraderie of the Class of 1967 as follows, "There is a commonality of spirit: a seriousness of purpose without taking the purpose too seriously; a passion for fun, now not at the expense of others, but at the expense of life's pains, absurdities, and limitations."

No less involved in your community, you have volunteered as president of the Pound Ridge Association and participated as a director of the Stamford Boys and Girls Club and Vision Management Corp. and as chairman of Lightworks Enterprises Inc. Recently you were named to the Board of Directors of the Red Cross of Westchester County.

Of course, all of this could not have been accomplished without the support of your wife and closest confidante, Judy. The two of you are the very proud parents of Adam and Rachel.

Your Dartmouth College application indicated that Albert Einstein was the most prominent 20th-century person you admired. How appropriate that Einstein once said, "If you can't explain it simply, you don't understand it well enough." Sam Ostrow, communicator extraordinaire, few people understand Dartmouth and her alumni as well as you! Your expert public relations skills have helped build bridges between a wide variety of Dartmouth alumni constituencies for more than forty years.

In recognition of your exceptional volunteerism on behalf of Dartmouth College, we honor you this evening with the presentation of the Dartmouth Alumni Award.