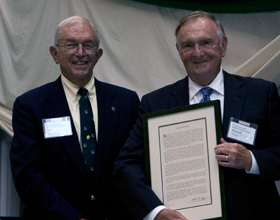 Born and raised in Albany, New York, you, Donald Davidoff '56, are well known in your hometown as "Mr. Dartmouth." We are so very fortunate that Sam Aronowitz '11 convinced you to attend Dartmouth College in 1952, sight unseen. It didn't take long for you to immerse yourself in campus activities with a sense of enthusiasm and optimism that continues today. Deciding to major in English (a decision which you attribute to the tea and cookies served in Sanborn Library), you spent time outside the classroom moving from sport to sport as a member of the Dartmouth College Athletic Council.Your passion for sports inspired you to referee the intramural and inter-fraternity basketball games. This served as a training ground for a lifetime of refereeing high school and college basketball competitions.In addition, you were a member of Pi Lamda Phi fraternity, Green Key and your dorm committee.

Upon graduation, it was on to Albany Law School.With law degree in hand, you entered state service with the State of New York in 1959 and continued through 1991 when you retired as Deputy Commissioner for Field Operations in the New York State Health Department.Accomplished in this field, in 1969 you received the Nathan Award from the Capital District Chapter of the American Society for Public Administration for "Outstanding Performance in Public Administration."A career change followed and you served as Executive Director of the Congregation Beth Emeth from 1991 - 2001.Not willing to truly acknowledge your retirement plans, the congregation asked you to return and you currently serve as their Interim Executive Director.

You do not hide your love of Dartmouth from the Albany community.Over the years you have served as the local alumni club treasurer, public information chair, secretary, book award chair and president.In addition, you have been a member of your class reunion giving committee, the Alumni Council, the Nominating and Alumni Trustee Search Committee, and president of the Club Officers Association.You began interviewing student applicants in 1961 and have served as the district enrollment director for the Albany area since 1972.In 1997 you were honored as District Enrollment Director of the Year.Recently you took on the role of head agent of the great Class of 1956!

You have been no less involved in your community where you have been a trustee of the Albany Academy, the New York State Special Olympics, and the Daughters of Sarah.You have also served as a director of the Community Hospice and are a Life Member of the Basketball Hall of Fame.

Of course, none of this would have been possible without the support of your lifetime love, Joanne.The two of you were high school sweethearts so she has been coming to Hanover as long as you have.The apple didn't fall far from the tree as you and Joanne proudly watched your two sons, Scott '82 and Jeffrey '85, graduate from Dartmouth.

Walt Disney once said, "Our greatest natural resource is the minds of our children."Don, we thank you for leading such extraordinary natural resources to Dartmouth over your years as a district enrollment director and volunteer extraordinaire.You are truly "Mr. Dartmouth" in Albany, NY, and we salute you and thank you.In recognition of your commitment to society, your family and your alma mater, we are immensely proud to honor you this evening with the presentation of the Dartmouth Alumni Award.