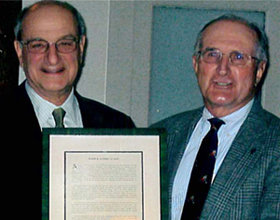 Arriving in Hanover in the fall of 1958, Barry Alperin '62, '63Tu, you admit that you were intimidated by the worldliness of your classmates. In fact, beginning classes on a Monday, you and your roommate predicted that you would both flunk out by Wednesday.

Lucky for us, neither of you could see into the future! You not only graduated but excelled at Dartmouth. Majoring in economics and government, you graduated Phi Beta Kappa proceeding to complete the Tuck 3/2 program where you received your MBA with distinction.Many mentors, including professors Starzinger and Williamson, influenced you along the way and instilled a sense of self-confidence which you appreciate to this day.Outside the classroom you served as finance manager of The Dartmouth and enjoyed the friendship of your fraternity brothers at Pi Lambda Phi.

Upon graduation, it was on to Harvard University where you received your law degree in 1966.Twenty years as a New York City attorney specializing in securities, finance, mergers and acquisitions followed before making a major career change.One of your clients, Hasbro, Inc, lured you away to lead the company as a senior executive officer and a director, ultimately serving as president of the Toy Manufacturers' Association and retiring as vice chairman of Hasbro.Today you serve as a consultant and corporate director for a wide variety of companies and organizations.Versatility is obviously one of your aspects and, in fact, you even considered returning to medical school at one point to become a physician!

Very vocal about your gratitude to Dartmouth for broadening your horizons, you have contributed an extraordinary amount of time volunteering on behalf of your alma mater.You have served as class agent, head agent, major gift committee member, co-chair of your class reunion giving committee, and leadership agent.In addition you have been a member of the Tuck Initiative Steering Committee, the Alumni Advisory Council for Jewish Life, and chair of the Tucker Foundation Board of Visitors.

You have expended no less time within your community, as education, social services, faith and the arts are priorities for you.Your extensive list of civic volunteerism includes having served as director and president of the Board Stanley Isaacs Neighborhood Center, trustee and president of The Jewish Museum, a founder and director of the Solomon Schechter School of Manhattan, trustee of the Caramoor Center for Music and the Arts, and trustee of the Hasbro Children's Foundation.

You are the first to credit your parents, who immigrated from Russia, for instilling this sense of philanthropy and activism within one's community.They were obviously role models for the entire Alperin clan as tonight your family celebrates the "Triple Crown" as you join your brother, Melvin '58, also a recipient of this award, and your nephew Mark '80, who received the Young Alumni Distinguished Service Award.

Of course, none of this would be possible without the love and support of your wife, Mimi, and your children Dan and Julie '90.The two of you began dating in high school and have been true partners on this journey together.

In recognition of all that you have contributed to your community, your career, and your alma mater we are honored to present you with the Dartmouth Alumni Award.