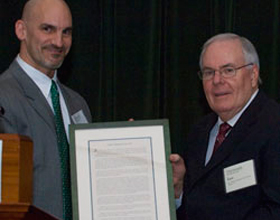 It's a sign of respect and a vote of confidence to be elected captain of your varsity football team. It's that and more to have made such an impact on your teammates that you're elected captain when you're sidelined with a broken wrist!

That's the kind of impact Leo McKenna '56, '57Tu had on his Big Green football teammates in 1956, and has been having on Dartmouth College ever since.

Leo, as a student you served as a team builder and leader all around campus: You were a member of the Casque and Gauntlet senior society, Green Key, the Athletic Council, the Undergraduate Council and its Judiciary Committee, Delta Kappa Epsilon fraternity, and the Newman Club, which you led as president. So much did you do for Dartmouth that you received the Milton Simms Kramer Award, honoring the member of the three underclasses who did the most for Dartmouth. Before your undergraduate career ended, you would be honored with the Barrett Cup, the highest accolade granted to a senior.

On top of this you worked thirty or more hours a week at Lou's Restaurant. Being the kind of guy you are, when you were offered the Aldebaran Scholarship, which required you to give up work so that you could devote more time to your studies, you wouldn't accept the scholarship until you asked permission from Lou himself!

You earned your MBA from the Tuck School of Business in 1957. Afterward, having spent summers working in the Country Store on Martha's Vineyard and Nantucket, you accepted a position as treasurer of this chain of stores while also fulfilling your duty as a member of the United States Army Reserve.Positions as comptroller of William Brand-Rex and staff assistant to the president of WR Grace followed. In 1967, you joined your good friend and fellow alumnus, Paul Paganucci '53, at Lombard, Vitalis and Paganucci, and began building teams on an all new playing field. An impressive career in corporate mergers unfolded as you negotiated deals between multi-million-dollar companies.In private practice as a financial consultant since 1974, you have concentrated on asset management, acquisitions, merger studies, and negotiations for corporations and individuals.In 1991 you returned to the Upper Valley, serving as a founder, director, and member of the Trust Committee of Ledyard National Bank.

In addition, you have been a member of numerous boards including the Life Insurance Company of Boston and New York, Reliable Electric Company, the John Brown Cook Foundation and the Cleveland Professional Basketball Company.

Though it's obvious that you have little interest in retiring, you do enjoy relaxing with your wife, Christine, on your "gentleman's farm" in Windsor, Vermont, and keeping up with your four beautiful children: Ann, John, Stephen '91, and Katie.

Leo McKenna, you have said, "What I've done for Dartmouth pales in comparison to what it has done for me." We have to disagree.We gather now in recognition of your leadership service--your talent in bringing together teammates, classmates, alumni, community members, and corporations--and to express our deep gratitude to you with the 2007-2008 Dartmouth Alumni Award.