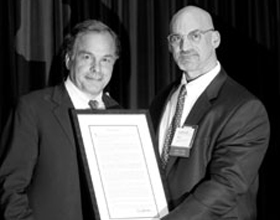 Looking at the horizon. It's one of the simple joys of being a human, afoot in the world. From our windows, highways, hilltops, almost anywhere, we look to the horizon, even if just for a moment, whenever we have the opportunity. As we thrill to the sky's expanse, we fill with the sense of new possibilities for our lives.

And some people think even bigger--they imagine new possibilities for the lives of others.

Jim Bildner '75 is one of those people.

Jim's professional, intellectual, and philanthropic paths have many turns and intersections. One intersection, of course, is at Main and Wheelock Streets: A longtime devotee of Dartmouth College, Jim has served his fellow members of the Class of 1975 as president, secretary, head agent, and member of the class reunion and reunion giving committees. He's led the Class Secretaries Association and has served on the Dartmouth Alumni Council, the DartmouthAlumni Magazine Editorial Board, the Tucker Foundation Board of Overseers, and the Dartmouth College Fund Committee.

And for the last four years, Jim and his wife, Nancy, have come to campus to visit their daughter, Lizzie, a member of the Dartmouth Class of 2008. And in the fall you could find him at the field hockey games, where, as "Ball Dad," he rounded up stray balls as he watched Lizzie excel on the field. Describing the joy of seeing Dartmouth through Lizzie's eyes, Jim has said, "the College appears to transform to each generation, but its core values remain the same."He should know--he's been coming to Hanover since the 1950s, he was a tot in the company of his father, Allen Bildner '47, '48Tu, and mother, Joanie.

Jim's long business career has spanned the retail, finance, and information technology industries.As general partner of New Horizons Partners, a venture philanthropy and venture capital firm, Jim has focused on catalyzing public policy issues in health care, education, the environment, and the arts. He is an adjunct professor at the Case Western Reserve School of Law and at Lesley University and is the Humanities and Literature Departments' Entrepreneur in Residence at Clark University.

That last title--Humanities and Literature Entrepreneur in Residence--should give you an indication of the maverick mind Jim brings to philanthropy. Arguably, if there's one endeavor that best captures his creative spirit, it's the Literary Ventures Fund, which Jim founded in 2005. This first-of-its-kind venture philanthropy organization "adopts" exceptional but underserved books, providing financial and strategic support for them regardless of who's publishing them. If a book sells beyond a certain point, the fund gets a percentage that it can then invest in other books. Other venture capitalists have invested in publishing, but Jim is the first to invest in individual books, the Boston Globe noted.

"The world's problems will continue to grow at a rate faster than our ability to address their root causes can grow," Jim has said. "It's vital that my generation work to find new sources of sustainable philanthropic capital and new ways to begin to address these increasing needs."

Philanthropically, Jim has covered a lot of other ground as well--too much to allow a complete account here, including serving as a Trustee on the Kresge Foundation, one of the nation's largest foundations. And the environment is clearly one of his public-service passions: He is a trustee of the The Trustees of the Reservation, and on the board of directors of the Lizard Island Research Foundation in Australia and on the National Council of Environmental Defense. The arts, education and the humanities are another passion: The National Public Radio Foundation, Boston Symphony Orchestra, Boston Public Radio, Case Western Reserve University and Lesley College all reap the benefits of his service in as a member of their board or as an overseer.

Jim attributes his drive for public service to sharing life with Nancy and Lizzie. "Like the sun rising against the bluest of skies," he says, "they keep my eyes and heart focused on the next horizon."

Jim Bildner, as you take us along with you toward that horizon, we'd like to take a moment to thank you for your long, active dedication to the Dartmouth community and to salute the impact you've had on the wider world. We'd like to honor you with the Dartmouth Alumni Award.