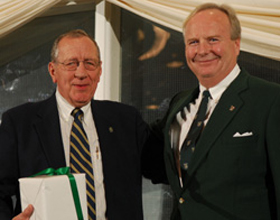 Your proud grandfather, Sid Hayward '26, former secretary of Dartmouth College, filed your name--William Hayward Mitchell '79--with the Dartmouth Admissions Office just 48 hours following your birth.Your mother, Nancy, and your father, James Mitchell '51 '54Tu, were just as Green, and made sure that your baby photos showed a wide assortment of Dartmouth attire!

It is no surprise that your future, Bill, would hold a Dartmouth education, but who could imagine how much you would derive from this experience? As an undergraduate you immersed yourself in a variety of activities, including class council, freshman football, interdormitory council, freshman council, and the Aristocracy senior society; you also served as vice president of Bones Gate fraternity, co-chair of summer council, and head ski instructor for the Dartmouth Ski School.In the classroom, you earned three citations in Spanish, culminating in the Language Study Abroad program in San Luis Patosi, Mexico.Not one to waste time, you began your graduate work at Northeastern University one day after receiving your Dartmouth diploma.You earned a combined MS/MBA.

A natural problem solver, you have excelled in the cable television and internet industries, building new business models and turning troubled companies around.Although you've spent the majority of your career in the New York City area, the "emerald city" called you home in 1999, when you relocated your family to Hanover.During the last eight years you have spent thousands of hours commuting back and forth between New York City, New Jersey, and the Upper Valley.

Your alma mater and fellow alumni have benefited greatly from your passion for Dartmouth College.Your extraordinary level of volunteerism has included serving as a fundraiser; member of the Alumni Council; Bones Gate advisor and director; and the Class of 1979 president, vice president, treasurer and reunion chair.During your tenure as president and treasurer, your class was recognized as the Class of the Year on three occasions.You are the director of Dartmouth in Community Service and a member of the Dartmouth Sponsors Program, and you have led the Class Presidents Association as vice president and president.

No less involved in your community, you have coached your three children, James, John, and Elizabeth '10 on their many teams through the years.Of course, you are the first to point out that the most precious encounter you had during your undergraduate days was the discovery of a beautiful Colby Sawyer student who became your bride.You and Bray have been married for twenty-six years and are true partners in this journey together.

Professor Sara Castro-Klaren noted in your Spanish citation, "Bill is cited for his unflagging enthusiasm, good nature, concern for his fellow students, and leadership qualities with which he naturally created a high degree of group identity and willingness to enjoy our fellow man."We couldn't have said it any better! Bill, it seems appropriate that forty-two years after your grandfather, Sid Hayward, received the Dartmouth Alumni Award, we gather here tonight to recognize you with this same prestigious honor.