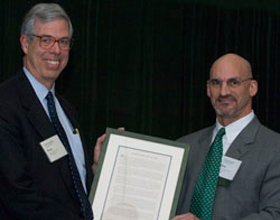 How does one define dedication to Dartmouth? What about serving as an overseer for the Hopkins Center, the Hood Museum of Art, and the Thayer School of Engineering; co-chairing a major fundraising campaign; chairing a class reunion giving committee not once but three times; serving on the Board of Trustees for ten years; and topping everything off by sending all four of your children to your alma mater?

If there were a Wikipedia entry for "dedication to Dartmouth," surely it would include a photo of one Peter Fahey '68, '70Th, whose service to his alma mater includes all that--and more!

A natural outdoorsman, as a youngster you travelled north from Winchester, Massachusetts, for many summer vacations in New Hampshire.Thus, Dartmouth was an attractive college to you, and you thoroughly enjoyed your undergraduate years, participating on the varsity basketball and track teams, in the Sphinx Senior Society and leading Phi Delta Alpha fraternity as president.Majoring in chemistry, you earned both a bachelor's and a master's degree from the Thayer School of Engineering.

Thayer degree in hand, you accepted a position with Abcor, Inc, where you worked in the field of membrane separation.In 1975 you earned an MBA with highest distinction from Harvard Business School and were honored as a Baker Scholar.A change in career paths resulted as you joined Goldman Sachs, where you were named vice president in 1978 and a general partner in 1982; currently you serve as a retired limited partner, a director of Goldman Sachs Bank USA and also on the Goldman Sachs Philanthropy Fund Board of Directors.

Lucky for Dartmouth, you retired at a young age for we've found plenty of ways to fill your time! In addition to your participation on numerous boards of overseers and your many years as a trustee, you've been a member of the Dartmouth College Fund Committee since 1978 (chairing it in 2003 and 2004), co-chaired the Committee on the Student Life Initiative, currently serve on the Dartmouth-Hitchcock Medical Center Board of Trustees, and co-chair the Campaign for the Dartmouth Experience.

All who know you realize that you are the "Number 1 Big Green Sports Fan." At one point you'd attended thirty-three consecutive Dartmouth-Harvard football games! Dartmouth was pleased to honor your support of athletics in 1999 when you were inducted into the Wearers of the Green. In fact, we can even credit Dartmouth sports with leading you to the love of your life. While spending spring break in Nassau watching the Dartmouth rugby team play, you met Helen, who was vacationing in the Bahamas during her own spring break from Skidmore - a perfect match! You're now the proud parents of four Big Green offspring: Kim '92, Peter Jr. '94, Michael '97, and Katie '06.

When asked to write twenty-five philosophical words to humanity on your Dartmouth College application, you responded, "You have but one life on this earth:do not waste it.Utilize every minute of your life to improve yourself and help your neighbor."Peter, you have dedicated many precious moments to improve the lives of Dartmouth students for years to come.In recognition of your dedication to your family, community and your alma mater we are immensely proud to honor you with the Dartmouth Alumni Award.